Lying just offshore at the south end of Aswan, Elephantine (2 km long by 1/2 km wide) is Aswan's largest island. Eminently defensible, the area was occupied from pre-dynastic times. During dynastic times, this fortified capital of the province dominated the island's southern tip, serving as both an administrative and trading center.

Although the Elephantine Island was considered the home of Nile-god Hapi, the great temple built here honored Khnum, the Ram-God who was worshiped throughout the cataract area.

Today, the island offers a variety of activities. Modern villages sprawl across Elephantine's center, bustling with activity. A small museum entices visitors to view its collections and to linger in its cool green garden Below this garden, at the edge of the water, you can still explore the ancient Nilometer where the ancient priests as well as more modern Romans and Muslims measured the height of the all-important inundation. Although little remains of the ancient buildings, you can stand on the site of ancient Egypt's last civilized outpost, atop the sweeping platform of the Temple of Khnum and look south-like the armies of the pharaohs once did, trying to see the dangers lurking deep in hostile Nubia. 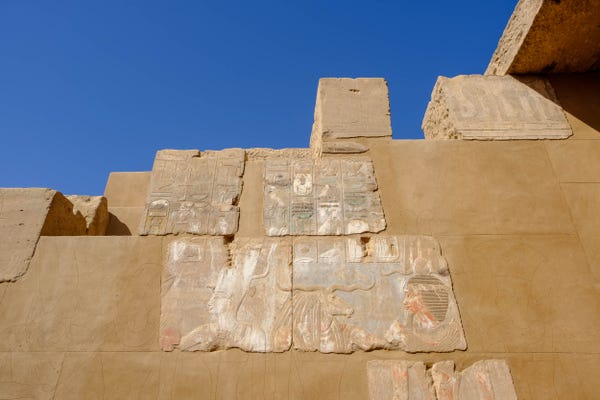 Open daily 0900-1600,You will need your museum ticket to get into the Nilo-meter and the ruins on the south end of the island; but if it's hot, you may want to buy your ticket and visit the ruins first, returning to the sheltered galleries and ending your visit to Elephantine with tea in the cool gardens. The museum, which contains pharaonic artifacts found in the clapboard house at the top of the hill. building's four wings form a square around a skylight which illuminates the base-ment gallery. As you enter, note the statues on the porch: Amenhotep III in the company of goddesses. To see the galleries in roughly chronological order, start with the predynastic materials on your left. Note the sophisticated jewelry in Room 2. Don't miss the basement gallery. with one of the royal rams discovered in the vaulted tombs near the Temple of Khnum.

As you descend the museum steps, the path forks. Take the southern branch, which leads to the Nilometer and the fortress's ruins. About 300 meters southeast of the museum, beneath a sycamore tree (pharaonic symbol of the bountiful earth-goddess) lies the Aswan Nilometer. Crafty gaffirs usually keep the barbed-wire gate shut. Built into the ancient quay, the steep staircase plunges down the bank to the river. This Nilometer, described by Strabo, was used from pharaonic times. Here the priests would measure the height of the inundation and calculate the effects of the flood. The steps used to be roofed, the sacred information available only to the initiated. The Nilometer was rebuilt by the Romans, and in the 19th C. the Muslims pressed it into service; thus Arabic as well as Roman numerals appear on the steps. 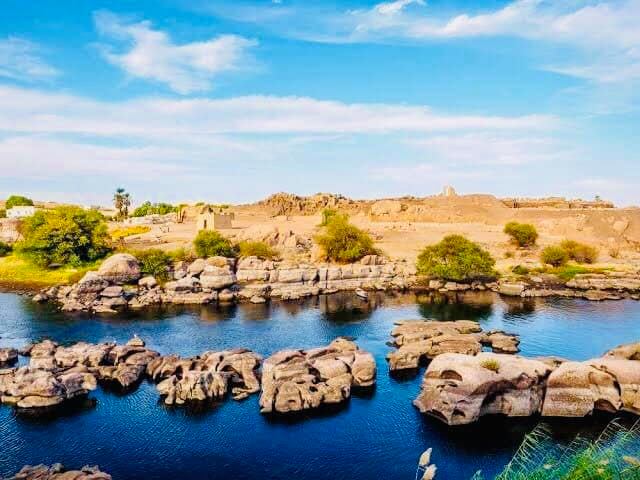 To reach the old city of Kom, return to the path and continue south; you'll emerge on the platform floor of the massive Temple of Khnum, which once dominated the center of the ancient city. The town was well established by at least the Old Kingdom and in the Middle Kingdom nearly doubled its size, growing northwest from the central focus of the temple. The area continued to expand throughout the Late Period and into the Roman era, spilling across the city's granite walls and eventually occupying nearly two square kilometers. 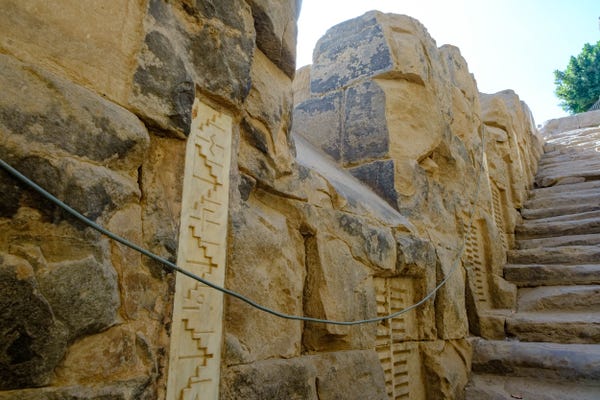 Excavations have uncovered private houses to the southwest which must have been mansions, homes of the governors and princes who are buried in the rock tombs across the river. The temple's axis runs east-west, and Roman paving stones abut the column bases, which were originally installed by Ramesses II when he rebuilt the temple. The large expanse of flooring is all that remains of the front section. Below you, to the east, are the massive blocks of the Roman quay which used to serve this temple. If you walk to the north side, you can see remains of pillars painted by the Romans, as well as several altars with Greek inscriptions.

The edge of the floor reveals that it was built upon filler blocks placed on the old level. To the west, isolated against the sky, stands the main temple entrance; built by Alexander II, its carvings show him worshiping Khnum. Beyond it, the jumble of ruins illustrates the temple's many transformations, but the only other structure is the large granite naos begun by Nectanebo II. The preliminary designs were painted, but the decorations were never finished. 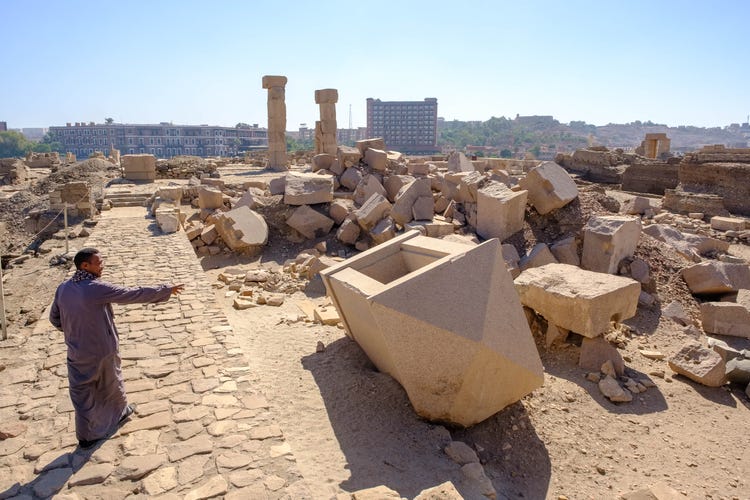 To the north lie the mud-brick vaults (Late Period) which once housed the bodies of the royal rams; one of the mummies recovered here is on display in the museum. Beyond and slightly northeast lies the New Kingdom Temple of Satis, consort of Khnum, which is currently being rebuilt. To the northwest is a shrine to Hekayib, the governor whose tomb was cut into the west bank. His cult flourished in the Middle Kingdom, and statues excavated from this shrine are on display in the museum. Just visible to the west is a 3rd Dynasty granite step pyramid. At the south end of the island, blocks discovered at Kalabsha Temple have been reconstructed into the sanctuary of a small Ptolemaic temple.

The single-room sanctuary had decoration added by the Nubian Pharaoh Arkamani in the 3rd century B.C. and was completed by the Romans. The reliefs on its outer walls name Caesar Augustus, the Roman. Fragments from the vesti bule (which was not reconstructed) lie in front of the chapel. Native Villages Several interesting native villages cluster along Elephantine's western edge. The inhabitants are friendly, the narrow, twisting alleys fascinating. Here you can see painted hajj houses, and others with lintels carved with crocodiles, fish, and men. 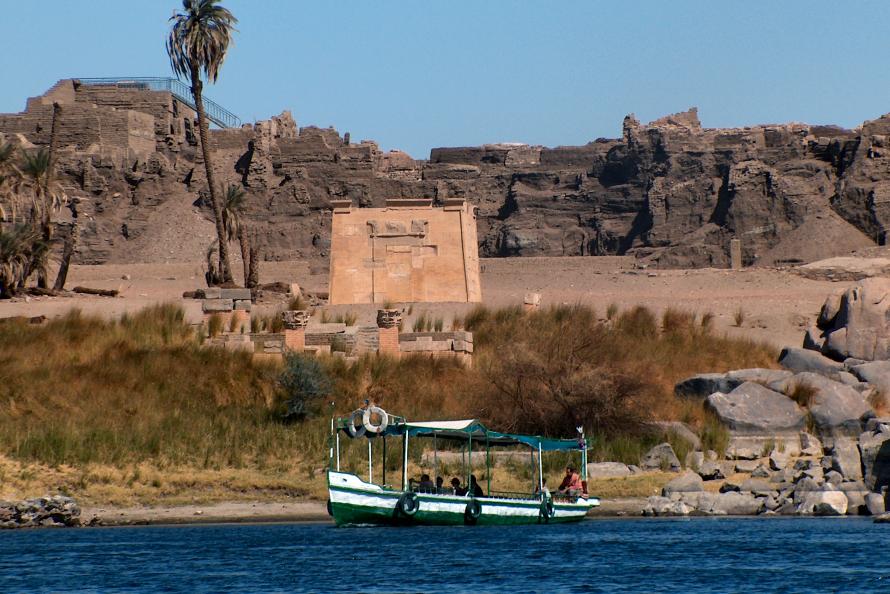 A public sailing ferry runs to Elephantine, leaving about every 15 minutes from the bank of the Cornishe just north of the EgyptAir office. You can reach it by walking down the steps before the park. On the island, the ferry docks just below the museum, to the north of the ruins and Nilometer.

From the relaxing Nileside city of Aswan, you have access to many great day tours and activities. Visit Abu Simbel or other notable archeological sites on the banks of Lake Nasser, travel north to Luxor to see Karnak temple, Luxor Temple, Hatshepsut Temple and Valley of the Kings, or take in nile cruise from Aswan to Luxor hile enjoying the beautiful scenery of Nile Valley or Enjoy different activities in Aswan like an afternoon sailing on the Nile or a visit to the Unfinished Obelisk and the Nubian Museum.

Q- Is Aswan worth visiting? A-“Aswan itself: the town is worth a visit” ... With its great market, connection to Nubian people and culture, its easy cross Nile ferry trip and a great place to stay, Aswan is a much more enjoyable place than any other place in the world.


Q-What is Aswan known for? A-Aswan is the ancient city of Swenett, later known as Syene, which in antiquity was the frontier town of Ancient Egypt facing the south. ... The stone quarries of ancient Egypt located here were celebrated for their stone, and especially for the granitic rock called Syenite.


Q-How many days do you need in Aswan?A-Three to 4 days- Ancient and cultural attractions, beautiful Nile scenery, and an easy charm. With three days in the city, you can enjoy its highlights, discover local culture, and take day trips or cruises along the Nile Valley or to Lake Nasser's temples.


Q-Is it worth going to Abu Simbel?A- As for Abu Simbel, the immensity of it's beauty and the unbelievable history behind is absolutely worth the visit. You cannot come to Egypt without visiting the marvelous Abu Simbel temple, one of the top Egypt tourist attractions.


Q-How much is a Nile cruise? A-Nile cruises offered online or by JOURNEY TO EGYPT start from around $150 per day and that's just for 5 star standard cruise ships. Generally these prices include 3 meals a day, plus 10 expert-led shore excursions with a Certified Professional Guides.


Q-What should I buy in Aswan? A-There are also several shops with interesting things like jewellery and perfumes for your shopping pleasure. Aswan Market - Nubian trinkets, antiques, costumes, Egyptian spices and perfumes are a must-buy in Aswan and the best place to purchase from.