A SAIL THROUGH HISTORY: THE FELUCCA BOATS OF THE NILE

Travel the River Nile as people who have in the time of the Pharaohs on a felucca boat with Journey To Egypt.

The mudbrick farmhouse casts a long shadow over pale, sun-scorched sand. Date palm silhouettes stand dark on the horizon. A late afternoon gust breaks the surface of the river pushing water high onto the muddy bank. The aged wooden boat moves at speed away from the land’s edge, its off-white sails full and stretched with momentum.

The boatman raises a hand over his brow. He stands looking into the blurred, sun-reflected distance where the water should end and sky begin. His face looks like a well-loved leather shoe; worn in and creased in all the right places. When he stands to smile and wave at every passing boat, our small vessel rocks and rolls with all of the pent-up enthusiasm of a hungry dog’s tail at dinnertime. 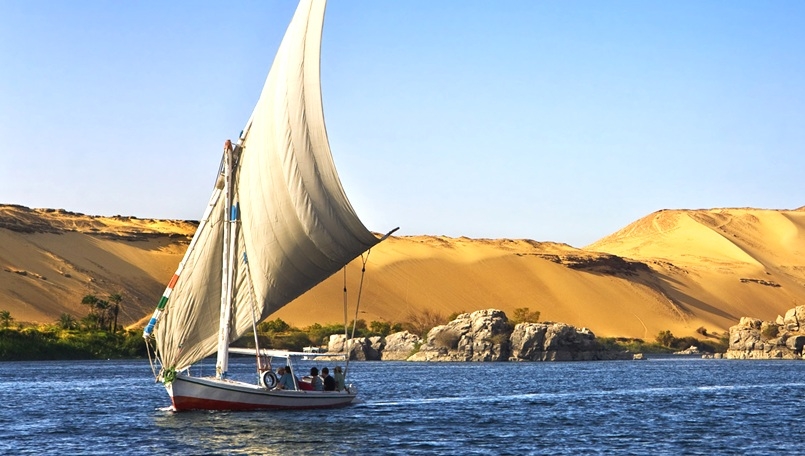 A larger river cruise ship ambles past heading in the same direction. A few passengers sit out on deck and we get close enough to see them raise their all-inclusive cocktails into the air as a greeting. Just as fast as it appeared, the river cruiser is out of sight, around a bend in the river before the last of the sun’s rays are spent and we have finished a conversation around how sometimes there are places where the journey is worth taking your time.

The river we are on is worth the wait. It can be argued that there is no body of water in the world that is flanked by so much history. The River Nile is not just the longest river in the world, but has also been the mythical life source for one of the greatest civilizations in human history.

There would be no conversation today about ancient Egypt without the River Nile. The annual inundation, or flooding of the Nile, millennia ago allowed for large-scale food production to support a growing population and led to the refinement of modern farming techniques like irrigation.

Such was the centrality of the Nile to ancient Egyptians, that river plays a core role in one of the most important myths of the Egyptian gods. In mythology, the god of the dead and regeneration, Osiris was a king of Egypt who was killed by his brother Seth on the banks of the River Nile and put into it in a coffin before having his corpse cut into pieces. Although his widow, Isis, succeeded in reassembling his body, with which she eventually conceived a son — the god Horus. Osiris, however, did not return to life and became king of the underworld. The ancient Egyptians believed that the dark shadowy waters of the Nile, and the sediment the river left after the annual flooding, were the result of Osiris and the afterlife. 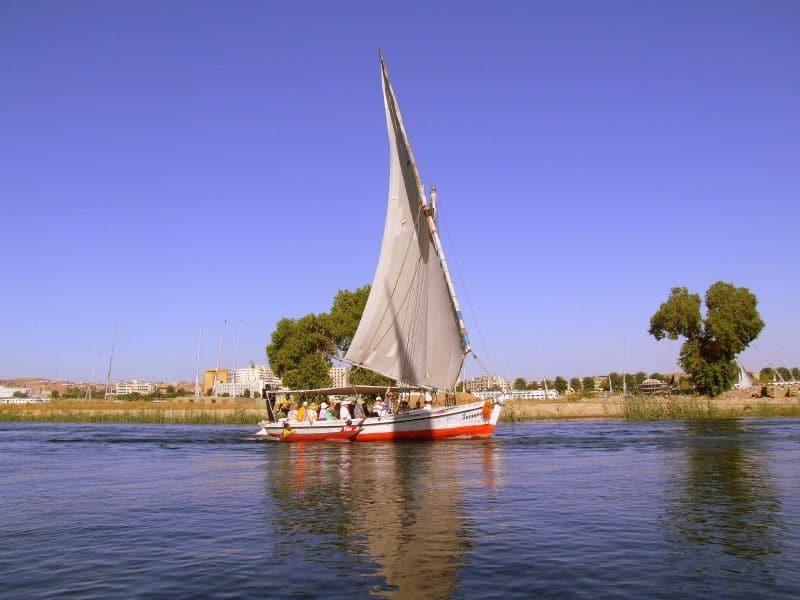 Today felucca cruises offer travellers a slow meander through history; the chance to travel the River Nile as people would have in the time of the Pharaohs. The cruises commonly range from a short voyage of a couple of hours out of Cairo to see the modern metropolis that has grown up along the riverbanks, to a multi-day journey between Aswan and Luxor. The popular Aswan-to-Luxor leg will take travellers to some of ancient Egypt’s most important sites like Nekheb (or El Kb), which was the capital of Upper Egypt prior to the construction of the Pyramids, and the Temple of Kom Ombo, dedicated to the two gods Sobek (the crocodile god) and Harveris (the sun god).

Fewer and fewer of the vessels are made entirely out of wood today, however the basic structure of the felucca has not really changed since the time of the ancient Egyptians. A felucca is an open-decked boat often covered in colourful cushions and pillows for passenger comfort, complete with canvas shelters to block the searing desert sun. Made for sailing over shallow waters, feluccas don’t have a keel as such, but a heavy centre plate that can be raised over sandbars or when depth is an issue. Accommodation for passengers is on the deck of the boat itself, so travellers are advised to bring a sleeping bag or blanket for the cooler evenings. 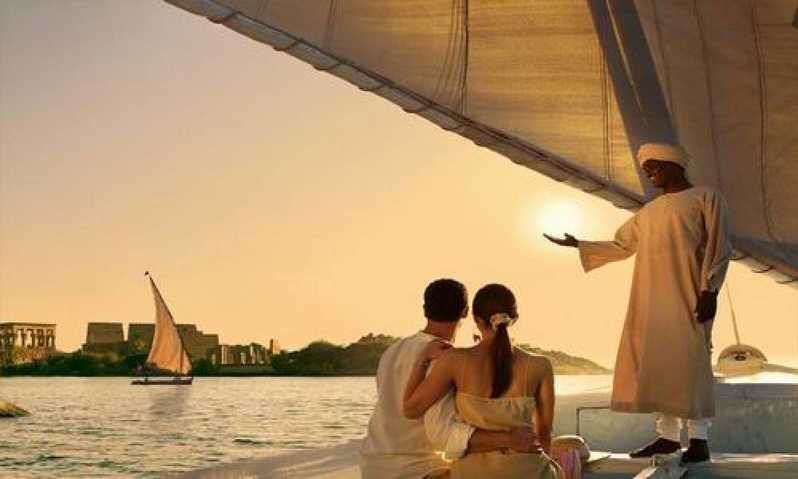 As the traditional sailboats of Egypt, feluccas are written into the country’s DNA. The iconic image of the single-sailed craft sitting low in the water is often what comes to mind when we think of this part of our world. While feluccas may not have the in-room wireless connectivity, mini-bar or tiled bathrooms of the larger ships that ferry passengers along the ancient river, the opportunity to sleep on the open water of the Nile — looking up at the same star-freckled night sky as those who built the pyramids — is a travel experience not to be missed.

Journey To Egypt runs a number of departures in Egypt encompassing a wide range of departure dates and activities to cater to different tastes. We’re thrilled at the prospect of showing you this big blue planet of ours — check out our Egypt tours here. 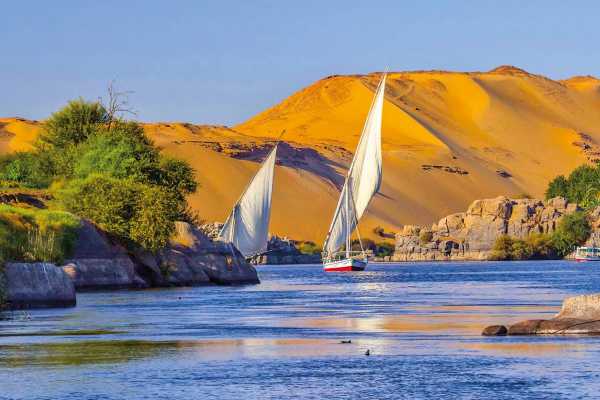 This journey through Egypt packs in awe-inspiring culture and adventure in eight energetic days. Explore the ancient sites along the Nile and discover the most famous of them all, the Great Pyramid of Giza. Embrace the culture and meet remarkable people as you sample some traditional fare with a Nubian family in a local village. Feel the buzz of vibrant bazaars in Aswan and Luxor, but still manage to relax and watch life unfold as you sail the Nile in a traditional felucca. Is this tour for me? Travel Style: Classic All of the highlights, culture, access, and I-can’t-believe-we-did-that moments, all at a great price. Service Level: Standard Comfortable tourist-class accommodations with character; mix of public and private transport. Physical Rating: 2 - Light Light walking and hiking suitable for most fitness levels. Nothing too challenging. Trip Type: Small Group Small group experience; Max 08 Age requirement: 12+ All travellers under age 18 must be accompanied by an adult.

Q- Where is the Nile River? A-The Nile River’s basin spans across the countries of Egypt, Sudan, South Sudan, Eritrea, Ethiopia, Kenya, the Democratic Republic of the Congo, Burundi, Rwanda, Uganda, and Tanzania. The Nile is composed of two tributaries: the White Nile and the Blue Nile. The White Nile, which is the longer of the two, begins at Lake Victoria in Tanzania and flows north until it reaches Khartoum, Sudan, where it converges with the Blue Nile. The Blue Nile begins near Lake Tana in Ethiopia. The Nile River empties into the Mediterranean Sea in northern Egypy.