History of the Nile River 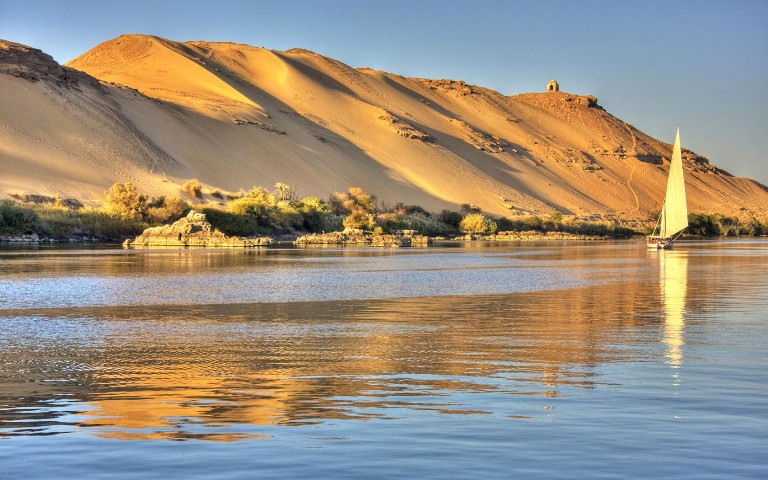 “Egypt is the Gift of the Nile” is an old saying passed spontaneously through the minds of most people all over the world without paying attention or realizing its real meaning. To achieve the meaning of this saying, you have to recognize what is the Nile River?

The Historical Role of the Nile River

At ancient times, the primitive Egyptians settled along the banks of the Nile River where they built simple houses and cottages for accommodation, grew many crops, and domesticate some animals and since then the first steps to the Egyptian glory had started. Cultivation was the starting point as the Nile River overflowed, carrying silt deposits which covered the neighboring lands along the Nile Valley and make them fertile. Wheat was the first crops, the ancient Egyptians cultivated, dependant on the Nile floods as a solution to the threat of starvations and lack of food at that time. On the other side, they used some animals such as water buffalos and camels for food, plowing, and carrying goods. In brief, the Nile River is essential for people, crops, and livestock. Gradually, most of the Egyptians moved to the Nile Valley where they could get their sustenance. As the Ancestors joined together on the Nile banks, they produced the ancient Egyptian civilization, one of the greatest civilizations in ancient history which witnessed building many temples and tombs with precious treasures and jewelry. The effect of the Nile River extends to Sudan where it significantly contributed to erect the Sudanese kingdoms.

The Nile River Facts from The Religious Side

As a part of the ancient pharaohs’ interests of the religious life and their insistence to create many gods and goddesses for physical elements, they honored the Nile River by creating Sobek “God of the Nile” or it was named “God of Crocodile” the god of a man with a crocodile head represented fertility, wetlands, medicine, and sudden death and the Nile River is regarded to be the sweat of Sobek. Another God related to the Nile in Ancient Egypt is “Hapy” it’s called “Lord of the River Bringing Vegetation” or “Lord of the Fish and Birds of the Marshes” the god of yearly floods of the Nile which greatly controlled the water level, symbolized fertility. The overflows carried rich silt to the lands of the Nile Valley in order to cultivate crops. Another role the Nile played in ancient Egyptian life is to divide the ancient calendar into three seasons, each one consisted of four months, “Akhet” represents the flood season when the Nile overflowed, Peret is the growing season when the soil is fertile by Nile silt, and Shemu symbolizes the harvest season at the times of drought.

The Nile River History and its Agricultural and Economic Role 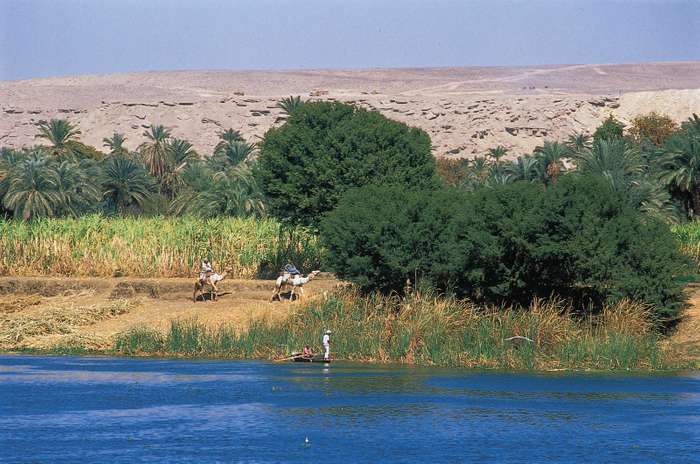 As the Nile River was the best way to record the ancient Egyptian civilization in history, it’s also the holy secret of success in other fields. Cultivation was the first activity that formed the pillars of the Egyptian empire. When the Nile River flooded, the water level rose, carrying the wealthy silt deposits and overflowed the lands of the valley then make them more fertile. The ancient Egyptians took advantage of the flood season to grow crops for their sustenance. After that, they resorted to depending on some domestic animals in their life to help them in agriculture works. These animals had taken the Nile River as their permanent refuge where they found the Nile waters. On the other side, the Nile was the causeway for people and goods, especially among the countries of the Nile Basin. At earlier times, the ancient used primitive boats of wood to exchange wares and merchandise through the Nile till they now use large ships. These exchanges made economic progress, resulted in the sublime Nile River.

Nile River Map and Where it Located? 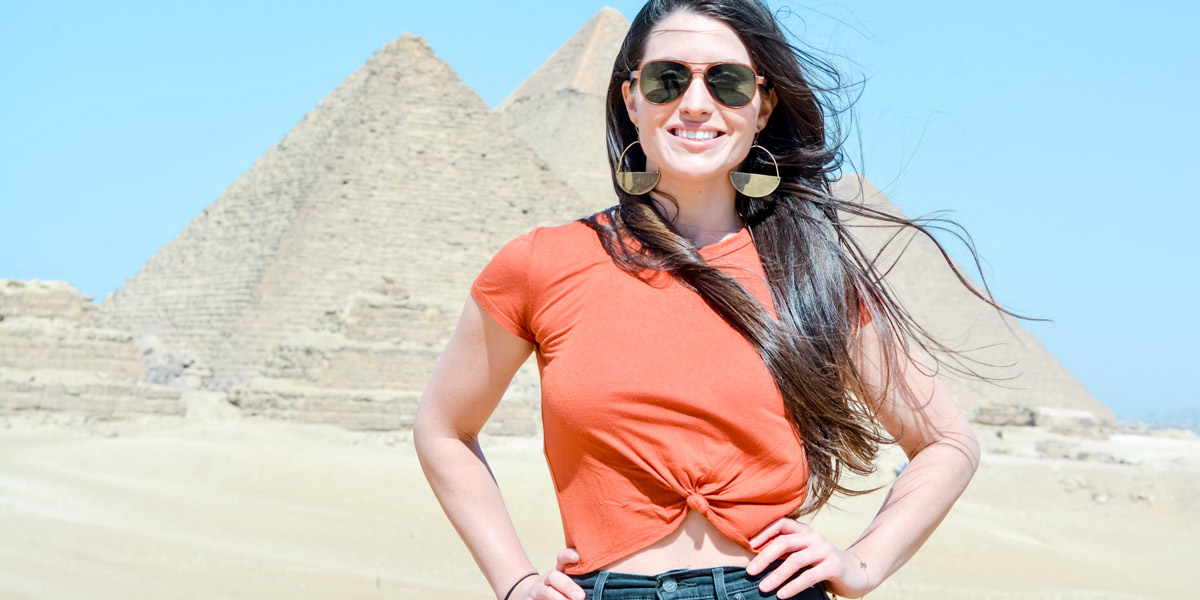 The Nile River is the longest river in the world, which stretches for 6853 km in the northeast of Africa. The word “Nile” was derived from two words, “Neilos” a Greek word means Valley, and the Latin word “Nilus”. The Nile River is the waterway that links the countries of the Nile Basin that covers 11 African countries: “Uganda, Eritrea, Rwanda, the Democratic Republic of the Congo, Tanzania, Burundi, Kenya, Ethiopia, South Sudan, Sudan, and Egypt“. The Nile is the main water source in all these countries which its water is pumped from two tributaries , the White Nile, the major stream which starts from the Great Lakes in Central Africa and the Blue Nile, the primary springhead of ninety percent of water and silt that flows at Lake Tana in Ethiopia and the two rivers join together in northern Khartoum, the capital of Sudan. Nevertheless, Lake Victoria is still regarded as the most essential source of the Nile River.

The Nile in Egypt extends from the northern limits of Lake Nasser in Aswan to the north of Cairo where the Nile is divided to form Nile Delta into two branches:

As mentioned in advance, the ancient Egyptians settled down and erected their civilization on the banks of the Nile River. Thus, most of Egypt historical destinations lie on the Nile shores, especially in Upper Egypt. Accordingly, travel agencies in Egypt and trip planners in Egypt tend to make use of the phenomenal geographic location of the Nile and it’s overlooking the remarkable sightseeing to make it a part of their Egypt tours packages in and around Luxor and Aswan. They add an option to see Luxor and Aswan spectacular landmarks on board Nile cruise where to discover both ancient and modern Egypt. 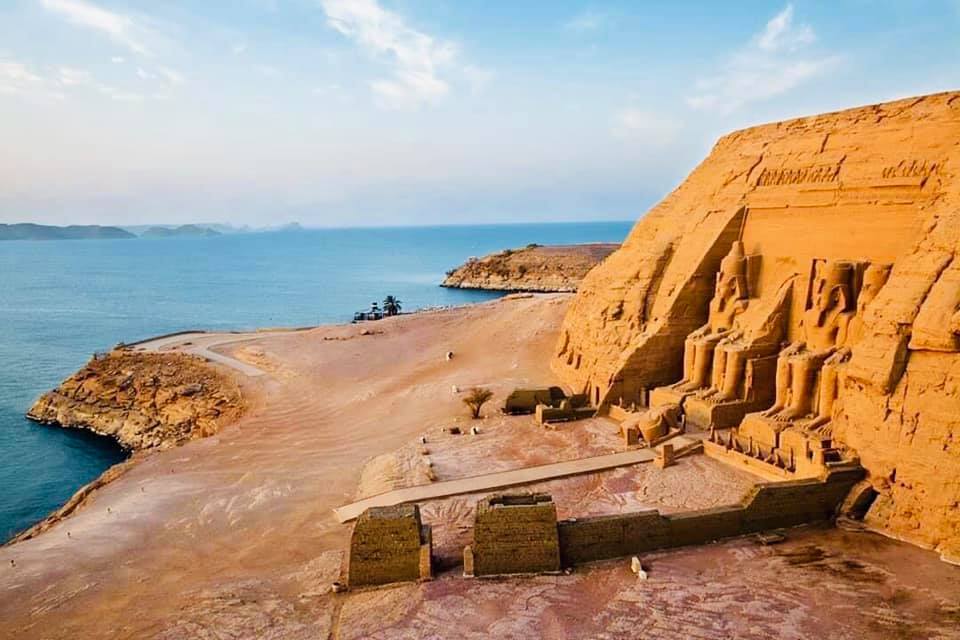 This awesome waterway is the best way to witness many more of the timeless pharaonic temples and tombs, Karnak Temples, Queen Hatshepsut Temple, Valley of the Kings, Abu Simbel Temple and the three majestic temples of Philae, Edfu, and Kom Ombo which directly overlook the Nile stream. On board the cruise, travelers can do many activities, have fresh food and drinks, listen to music and dance, relax on deluxe swimming pools, and also massage sessions are available with the best service ever.