The first step in building a pyramid was to choose a suitable site. This had to be on the west side of the Nile because the west was where the sun set and where the dead were thought to enter the underworld. The pyramids also needed to be situated on the high ground, away from the danger of flooding at the time of the Nile's inundation.

However, it could not be too far away from the bank because the river would be used to transport blocks of fine quality limestone for the outer casing from Tura, on the other side of the Nile. The site chosen would be at a point on the desert plateau that would prove a firm rock base capable of supporting the great weigh of the pyramid without any risk of cracking. It would also need to be within easy reach of the capital, so that the king could go to inspect the building work whenever he wished.

The Ancient City of Memphis:

Some of the oldest structures in Cairo date back to almost two centuries BC during the Greco-Roman period; however, the Giza Pyramids are considered as the most famous and the oldest structures among all other pyramids in Egypt. Despite being close to Cairo city, the gap in the date between building the pyramids and the city itself proves that they have distinct histories.

Before Cairo city ever existed, the pyramids at Giza were part of an older city legacy and civilization. The ancient city of Memphis was the source of authority of the Old Kingdom (2686—2181 BC) of Ancient Egypt, and it was the hometown of Egyptians who built the pyramids.

One of the interesting Egypt pyramids facts is that, during that period, Memphis was the most powerful and well known city not only in Egypt, but also in the whole world. What made it really famous was that, during that time, almost 100 pyramids were built near Cairo alone.

Cairo’s location, being near to Memphis city, proves how important was Memphis throughout the ancient Egyptian history. Moreover, both Cairo and Memphis were and still located at the top part of the Nile Delta. 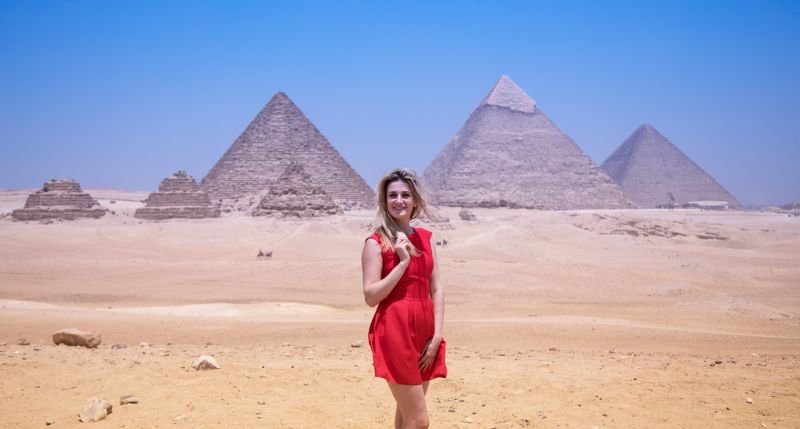 The Giza Pyramids are attached to the name of Egypt itself. The huge sizes of the pyramids, especially the Giza ones, are and will always be an awe factor for millions of tourists who visit Egypt all year long. The amazement factor comes from the question that everyone who visits Egypt asks, how the three kings, Khafre, Khufu, and Menkaure, managed to build such huge structures?

Egypt pyramids facts are plenty and one amazing fact is that Khufu pyramid is considered as one of the Seven Wonders of the Ancient World, and is known as the Great Pyramid of Giza.

Khafre, the son of Khufu, and king Menkaure, also known for their impressive pyramids in Giza, but none of the two pyramids are as huge as the great pyramid of King Khufu. The Great Pyramid was constructed during 2560 BC and it is 481 feet tall, and now it reached 455 feet because of the removal of its remarkable capstone.

Today’s Archeologists consider the ancient Egyptian structures like the pyramids as great indicators of Egypt’s economic and political stability during the Old and Middle Kingdoms of ancient history. It consumed so many resources to build a pyramid, and also a lot of effort to get the right and qualified labor force for the construction process. The huge size and quality of structure of the construction of pyramids at different periods during that time of Ancient Egyptian history shows that there were more advanced building resources available during the 4th dynasty than at any other time.

Khafre pyramid is considered as the second largest pyramid in Giza. It was built for king Khafre, the third pharaoh who belongs to the 4th Dynasty during the Period of Ancient Egypt’s Old Kingdom (2540 BC). The king was also known by the name Chephren, which was a Greek name. He was the son of King Khufu, who built the Great Pyramid of Giza and was the grandson of King Sneferu.

The pyramids built by king Khafre and his family are considered as the greatest in Egypt’s history and human history, during the ‘golden age’ of the Old Kingdom.

The statue of the Great Sphinx is also one of the most famous structures of the ancient Egyptian history. It was built for the purpose of protecting the burial site of the kings in Giza. 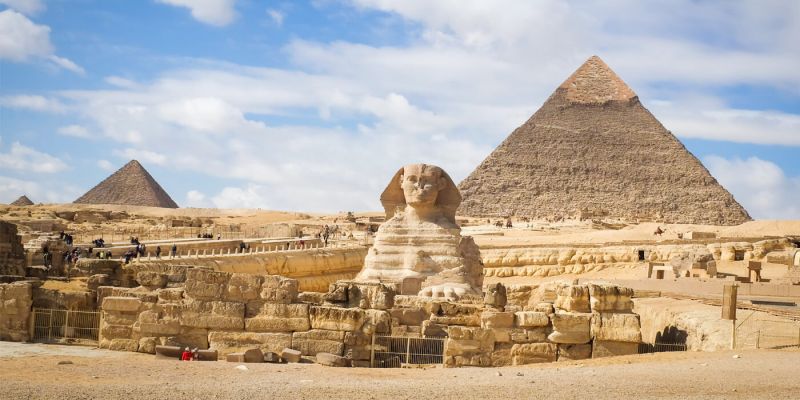 Pyramid of Menkaure is the third pyramid and the smallest one among the great pyramids of Giza. It belongs to King Menkaure (Mycerinus in Greek). Archaeologists believe that it has been finished at the end of the 26th century BC. King Menkaure, just like the other kings who own pyramids at Giza, ruled Egypt during the 4th Dynasty at the time of the Old Kingdom Period of Ancient Egyptian history.

Some archeological evidence suggests that Menkaure is the successor of King Khafre, the owner of the second pyramid and the statue of the Great Sphinx, but some historical accounts denied that fact.

The Great Sphinx of Giza:

With a body of a lion and a head of a human, statues like the great Sphinx appeared for the first time ever in Egypt as a kind of representation of a two sided story behind each structure of a statue during the beginning of the dynastic period. The first representation of a king in the form of the statue of the great sphinx was in the Middle of the 4th dynasty.

King Djetef Ra was the first king to have a Sphinx statue, as he was the successor of King Cheops, and that was considered as the first royal representation of its kind in the form of a Sphinx. The statue was discovered nearby the pyramid at Abu-Rawash in Giza and it is now displayed in Louvre Museum.

So, what is the meaning of the "Sphinx"?

The word "Sphinx" is originally a Greek word of the Ancient Egyptian name "Ssp Ankh" which means the living image or representation of something. The Sphinx statue mainly represents the king and his living image and it also represents the combination between the mental power and the Physical power. The mental power of the king is represented in the human head of the statue, while the physical power is represented in the body of a lion. Egyptology scientists believe that if the sphinx was a representation of an ancient Egyptian God, so it is said that they managed to tame the wild nature of the lion with the human intelligence and turning it into a divine peaceful character.

The village of Dahshur is located about 40 kilometers southwest of Cairo and famous for its impressive ancient structures. Excavation missions at Dahshur site have revealed the remains of total of seven pyramids till now, in addition to extensive tomb complexes that were built for queens and nobles from Memphis city up until the 13th Dynasty during the time of the Middle Kingdom.

Built during the era of King Sneferu (2613-2589 BC), the founder of the 4th Dynasty, both the Bent Pyramid and the Red Pyramid at Dahshur are great evidences of the impressive structural development found in the  construction of the Great Pyramid of Giza and other ancient Egyptian pyramids.

The Red Pyramid at Dahshur:

The Red Pyramid is another fancy example of a great construction project during the 4th Dynasty as it was built for the pharaoh Sneferu. Another example is the Bent Pyramid which is located at the same site, nearby the Necropolis at Dahshur city, Sneferu decided to correct the flaws that were made during the construction of the bent pyramid and the one at Meidum that went down during its construction.

The Red Pyramid got finished at the beginning of the 26th century BC, it was considered as the first successful attempt to build a complete pyramid, which made it the most inspirational type of construction for the later 4th Dynasty pyramids of Giza.

The Bent Pyramid at Dahshur:

Discover a cocktail of Tours in Egypt tailord to your taste 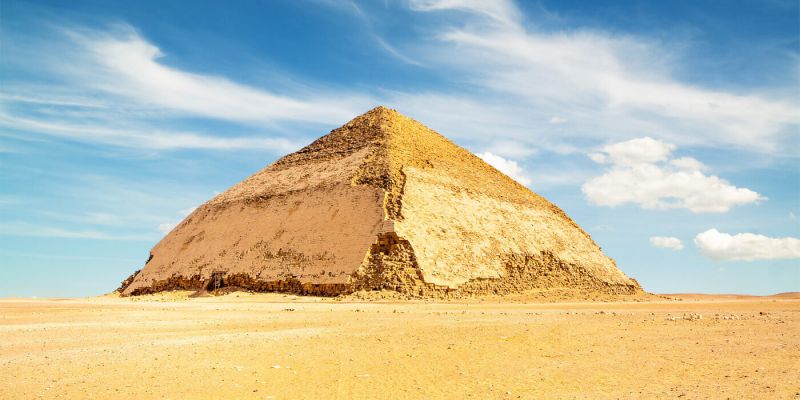 
Q-What do the pyramids of Giza represent? A-Historians continue to debate about the ancient Egyptians’ use of the pyramid form for the royal tombs at Giza and in funerary sites elsewhere. Several theories have been proposed about what the form represents: the pyramid may function as a stairway for the pharaoh’s ka to reach the heavens, it could refer to the ancient mound of creation, or it might symbolize sunrays spreading to the earth.


Q-What’s inside the pyramids of Giza?A-The pyramids of Giza are mostly solid masses of stone with very little to be found inside. Like many ancient Egyptian pyramids, those of Khafre and Menkaure have passageways at their base that lead to small subterranean burial chambers underneath each pyramid. Khufu’s pyramid also has underground tunnels, but the burial chamber is located in the centre of the structure, accessible via a climb up a tight interior passageway. Contrary to what one might expect, there are no hieroglyphic texts, treasures, or mummies in any of pyramids of Giza. Decoration inside pyramids began several centuries after those of Khufu, Khafre, and Menkaure were constructed. Moreover, any treasure would have been plundered in ancient and medieval times—a fate that likely affected the bodies of the kings, which have never been found...


Q-How did the Egyptians build the pyramids?A- The question of how the pyramids were built has not received a wholly satisfactory answer. The most plausible one is that the Egyptians employed a sloping and encircling embankment of brick, earth, and sand, which was increased in height and length as the pyramid rose; stone blocks were hauled up the ramp by means of sledges, rollers, and levers. According to the ancient Greek historian Herodotus, the Great Pyramid took 20 years to construct and demanded the labour of 100,000 men. This figure is believable given the assumption that these men, who were agricultural labourers, worked on the pyramids only (or primarily) while there was little work to be done in the fields—i.e., when the Nile River was in flood. By the late 20th century, however, archaeologists had found evidence that a more limited workforce may have occupied the site on a permanent rather than a seasonal basis. It was suggested that as few as 20,000 workers, with accompanying support personnel (bakers, physicians, priests, etc.), would have been adequate for the taske.


Q-Can you go inside or climb the pyramids of Giza?A-The interiors of all three pyramids of Giza are open to visitors, but each requires the purchase of a separate ticket. Although tourists were once able to freely climb the pyramids, that is now illegal. Offenders face up to three years in prison as penalty. In 2016 a teenage tourist was banned from visiting Egypt for life after posting photos and videos on social media of his illicit climb.


Q-What are the Must be Visited Places in Egypt? A-The entire country of Egypt deserve to be seen with its every heavenly detail but there are places that must be seen such as the breathtaking Hurghada's red sea, The wonders of Cairo the pyramids of Giza, the great sphinx, the Egyptian Museum, Khan El Khalili, the wonders of Luxor like Valley of the Kings, Karnak and Hatshepsut temple and the wonders of Aswan like Abu Simbel temples, Philea temple, Unfinished obelisk and The Wonders of Alexandria like Qaitbat Citadel, Pompey's Pillar and Alexandria Librare.