Covering the majority of northern Africa, the Sahara is the world’s most famous desert. But how much do you really know about this iconic landscape? Here are 10 facts about the Sahara Desert that you might not have heard before. 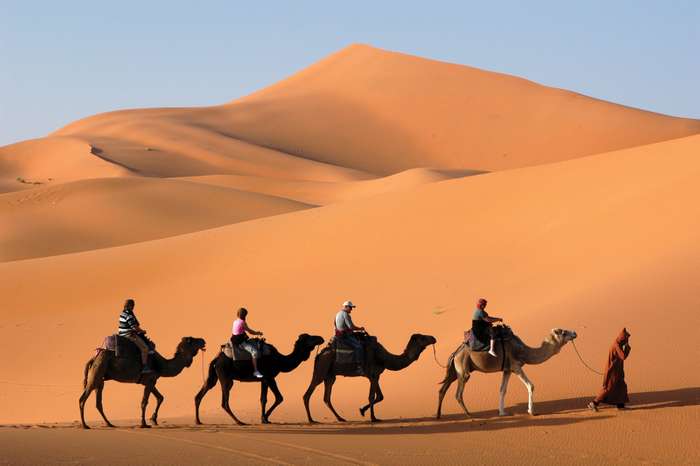 1. It’s a common misconception that the Sahara is the world’s largest desert. In actual fact, it’s the largest hot desert behind the Arctic and Antarctica, which are both cold deserts. During the summer months, temperatures in the Sahara average between a sizzling 38-46°C.

2. The Sahara Desert spans some 8,600,000 square kilometres. However, this changes over time as the actual area of the desert expands and contracts with the seasons.

3. Scientists estimate that the Sahara’s overall size has grown to be 10% larger than it was nearly a century ago. While this is partly due to natural climate cycles, human-driven climate change is also responsible.

4. Spanning nearly a third of the African continent, the Sahara reaches a total of 11 countries. These include Egypt, Algeria, Chad, Libya, Mali, Mauritania, Morocco, Niger, Sudan, Western Sahara and Tunisia.

5. The Sahara gets its name from the Arabic word sahra, which means ‘desert’.

VISIT THE SAHARA ON OUR ‘Egypt Tours’

6. Sand dunes and sheets cover only around 25% of the Sahara’s actual surface. This desert also has numerous other land features including salt flats, gravel plains, plateaus and even mountains where snow has been recorded.

7. While many of the Sahara’s sand dunes reach over 180 metres in height, this desert’s highest point is an extinct volcano called Mount Koussi in Chad, which has an elevation of 3,415 metres.

8. It may be one of the harshest environments on Earth, but the Sahara is home to a variety of wildlife that has adapted to a life of extremes. Alongside camels and goats, desert species include cheetah, gazelles, ostrich, Fennec fox and monitor lizards. More deadly critters include the deathstalker scorpion and the extremely venomous sand viper.

9. Around 2.5 million people also call the Sahara home, most of which have Berber or Arabic roots. They either live in permanent settlements near water sources or have a nomadic lifestyle, travelling from place to place with herds of sheep, goats or camels.

10. Saharan trade routes played an important part in the economies of Ancient Africa. Goods such as copper, salt and gold were transporting using camel caravans, which in their heyday consisted of thousands of camels. There’s even a record that mentions caravans of 12,000 camels travelling between Egypt and Sudan.

If these facts have you inspired to visit the Sahara Desert, why not check out our Egypt tours?

Q- What is the climate of the Sahara Desert? A-The Sahara exhibits great climatic variability within its borders, with two major climatic regimes differentiating along a north-south axis: the desert’s northern latitudes are arid subtropical and have two rainy seasons, while the southern ones, although also arid, are more tropical and have only one rainy season. The southern reaches of the Sahara end in the Sahel, a semiarid buffer zone that separates the desert from the more temperate savanna biomes beyond. A number of other factors affect climatic variability within the Sahara as well: topography does so, as do ocean currents, the latter of which are responsible for the slightly cooler and more humid conditions found on the desert’s western margins. Some scientists estimate that the Sahara became arid about two to three million years ago, while others contend that it happened before this.


Q-How did the Sahara get its name? A-In Arabic the Sahara is called Al-Ṣaḥrāʾ al-Kubrā, or “the Great Desert.” The Arabic word ṣaḥrāʾ simply means “desert,” and its plural form, ṣaḥārāʾ, is where the northern African desert gets its Anglicized name. The word ṣaḥrāʾ shares its roots with the Arabic word aṣḥar, which translates to “desert-like” and specifically connotes the yellowish red color that characterizes the Sahara’s sandy expanses.


Q-Can plants and animals survive in the Sahara Desert?A-Though boasting an extremely low primary productivity, the Sahara does manage to support some life. Many of the organisms that can survive have been able to do so with adaptations for arid environments: for example, many herbaceous plants found in the Sahara are ephemerals, meaning that almost all of their life cycle—from germination to seed dispersal—occurs in the two- to three-week period after a heavy rain. Animals such as the desert snail survive by using estivation, a period of dormancy that some animals can enter when encountering extreme environmental stress. Other organisms, although adapted more for a Mediterranean or tropical climate than an arid one, have persisted in the Sahara mostly by sticking to its slightly more hospitable highlands and oases.


Q-Do people live in the Sahara Desert?A- People have lived in the Sahara long before recorded history, at certain times in regions that are now too arid for human inhabitance. Archaeological findings indicate that there were once ancient Saharan lakes, upon the shores of which humans lived, hunted, and fished. Even after these lakes ceased to exist, humans survived for centuries in the desert using alternative methods: nomadic pastoralists herded goats, sheep, or camels to whatever pasturage could be found; sedentary agriculturalists, confined to oases, harnessed their limited water resources to grow crops such as date palms and barley; and specialists (for example, blacksmiths) traded wares with their agriculturalist and pastoralist neighbors. Certain groups have long relied on traveling and trading along caravan routes to obtain their livelihood, journeying by camel to oases and population centers all over the Sahara. Modern economic development has disrupted many of these traditional means of subsistence, however, with many desert dwellers seeking more lucrative opportunities in developed regions and oasese.


Q-What is the modern economy of the Saharan Desert like?A-After World War II, prospecting revealed that the Sahara was laden with oil and mineral resources, which have served as a major attractor of international investment since. Oil, natural gas, and coal reserves have been discovered all over northern Africa and particularly have been exploited by various countries, such as Egypt, Libya, and Algeria. Although these industries have introduced potentially high-wage jobs to the Sahara, they are also responsible for the displacement of desert peoples from their traditional modes of existence and have contributed to the increasing overcrowding and poverty in developed regions.