Nefertiti’s parentage is unrecorded, but, as her name translates as “A Beautiful Woman Has Come,” early Egyptologists believed that she must have been a princess from Mitanni (Syria). There is strong circumstantial evidence, however, to suggest that she was the Egyptian-born daughter of the courtier Ay, brother of Akhenaton’s mother, Tiy. Although nothing is known of Nefertiti’s parentage, she did have a younger sister, Mutnodjmet. Nefertiti bore six daughters within 10 years of her marriage, the elder three being born at Thebes, the younger three at Tell el-Amarna. Two of her daughters became queens of Egypt. 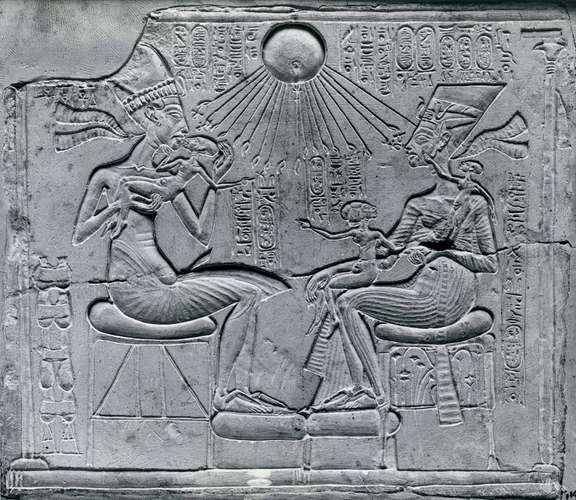 The earliest images of Nefertiti come from the Theban tombs of the royal butler Parennefer and the vizier Ramose, where she is shown accompanying her husband. In the Theban temple known as Hwt-Benben (“Mansion of the Benben Stone”; the benben was a cult object associated with solar ritual), Nefertiti played a more prominent role, usurping kingly privileges in order to serve as a priest and offer to the Aton. A group of blocks recovered from Karnak (Luxor) and Hermopolis Magna (Al-Ashmunayn) shows Nefertiti participating in the ritual smiting of the female enemies of Egypt. She wears her own unique headdress—a tall, straight-edged, flat-topped blue crown.

By the end of Akhenaton’s fifth regnal year, the Aton had become Egypt’s dominant national god. The old state temples were closed and the court transferred to a purpose-built capital city, Akhetaton (Amarna). Here Nefertiti continued to play an important religious role, worshipping alongside her husband and serving as the female element in the divine triad formed by the god Aton, the king Akhenaton, and his queen. Her sexuality, emphasized by her exaggeratedly feminine body shape and her fine linen garments, and her fertility, emphasized by the constant appearance of the six princesses, indicate that she was considered a living fertility goddess. Nefertiti and the royal family appeared on private devotional stelae and on the walls of nonroyal tombs, and images of Nefertiti stood at the four corners of her husband’s sarcophagus.

Some historians, having considered her reliefs and statuary, believe that Nefertiti may have acted as queen regnant—her husband’s coruler rather than his consort. However, the evidence is by no means conclusive, and there is no written evidence to confirm her political status.

Soon after Akhenaton’s 12th regnal year, one of the princesses died, three disappeared (and are also presumed to have died), and Nefertiti vanished. The simplest inference is that Nefertiti also died, but there is no record of her death and no evidence that she was ever buried in the Amarna royal tomb. Early Egyptologists, misunderstanding the textual evidence recovered from the Maru-Aten sun temple at Amarna, deduced that Nefertiti had separated from Akhenaton and had retired to live either in the north palace at Amarna or in Thebes. This theory is now discredited. Others have suggested that she outlived her husband, took the name Smenkhkare, and ruled alone as female king before handing the throne to Tutankhamen. There is good evidence for a King Smenkhkare, but the identification in the 20th century of a male body buried in the Valley of the Kings as Tutankhamen’s brother makes it unlikely that Nefertiti and Smenkhkare were the same person. 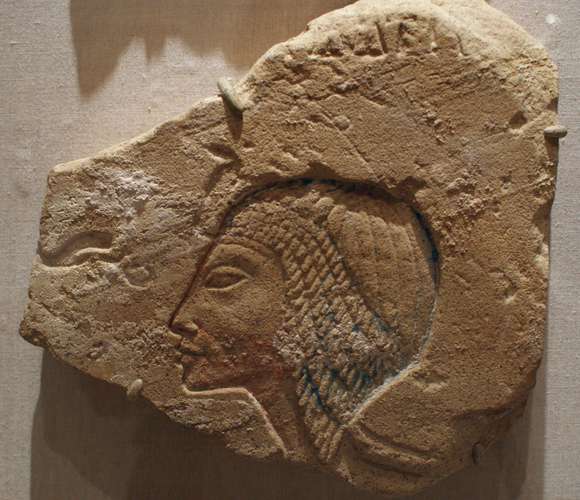 Nefertiti’s body has never been discovered. Had she died at Amarna, it seems inconceivable that she would not have been buried in the Amarna royal tomb. But the burial in the Valley of the Kings confirms that at least one of the Amarna burials was reinterred at Thebes during Tutankhamen’s reign. Egyptologists have therefore speculated that Nefertiti may be one of the unidentified bodies recovered from the caches of royal mummies in the Valley of the Kings. In the early 21st century attention has focused on the “Younger Lady” found in the tomb of Amenhotep II, although it is now accepted that this body is almost certainly too young to be Nefertiti.

Amarna was abandoned soon after Akhenaton’s death, and Nefertiti was forgotten until, in 1912, a German archaeological mission led by Ludwig Borchardt discovered a portrait bust of Nefertiti lying in the ruins of the Amarna workshop of the sculptor Thutmose. The bust went on display at a museum in Berlin in the 1920s and immediately attracted worldwide attention, causing Nefertiti to become one of the most recognizable and, despite a missing left eye, most beautiful female figures from the ancient world.

If you want to enjoy a fabulous vacation where you will visit all these historical monuments and discover the Ancient Egyptian Civilization, then you can explore our Egypt tours, Egypt tour packages or Nile cruises and choose your own journey.

Q- Why is Nefertiti so famous? A-Nefertiti was a queen of Egypt and wife of King Akhenaton, who played a prominent role in changing Egypt's traditional polytheistic religion to one that was monotheistic, worshipping the sun god known as Aton. An elegant portrait bust of Nefertiti now in Berlin is perhaps one of the most well-known ancient sculptures.


Q-What was Nefertiti's reign like? A-Some historians believe that Nefertiti may have acted as her husband’s coruler rather than his consort, but the evidence is not conclusive. Nonetheless, she played an important religious role, worshipping the god Aton alongside her husband. Representations of Nefertiti with her six daughters suggest that she was also considered a living fertility goddessa.


Q-What was Nefertiti's family like?A-Nefertiti’s parentage is unrecorded, but there is strong circumstantial evidence to suggest that she was the Egyptian-born daughter of the courtier Ay, a maternal uncle of her husband, Akhenaton. She had a younger sister, Mutnodjmet. Nefertiti bore six daughters within 10 years of her marriage, two of whom became queens of Egypt.


Q-How did Nefertiti die?A- Soon after Akhenaton’s 12th regnal year, one of the princesses died, three disappeared, and Nefertiti vanished. The simplest inference is that Nefertiti also died, but there is no record of her death and no evidence that she was ever buried in the Amarna royal tomb. Her body has never been founde.


Q-Is it safe to travel to Egypt 2020?A-Tourists have been visiting Egypt for centuries and Egyptians have well-earned reputation for warmth and kindness toward visitors. Egyptian cities are generally very safe, especially in area where tourists frequenty.