Check out 10 surprising facts about the fabled Queen of the Nile.

1. Cleopatra was not Egyptian.

While Cleopatra was born in Egypt, she traced her family origins to Macedonian Greece and Ptolemy I Soter, one of Alexander the Great’s generals. Ptolemy took the reigns of Egypt after Alexander’s death in 323 B.C., and he launched a dynasty of Greek-speaking rulers that lasted for nearly three centuries. Despite not being ethnically Egyptian, Cleopatra embraced many of her country’s ancient customs and was the first member of the Ptolemaic line to learn the Egyptian language.

2. She was the product of incest.

Like many royal houses, members of the Ptolemaic dynasty often married within the family to preserve the purity of their bloodline. More than a dozen of Cleopatra’s ancestors tied the knot with cousins or siblings, and it’s likely that her own parents were brother and sister. In keeping with this custom, Cleopatra eventually married both of her adolescent brothers, each of whom served as her ceremonial spouse and co-regent at different times during her reign. 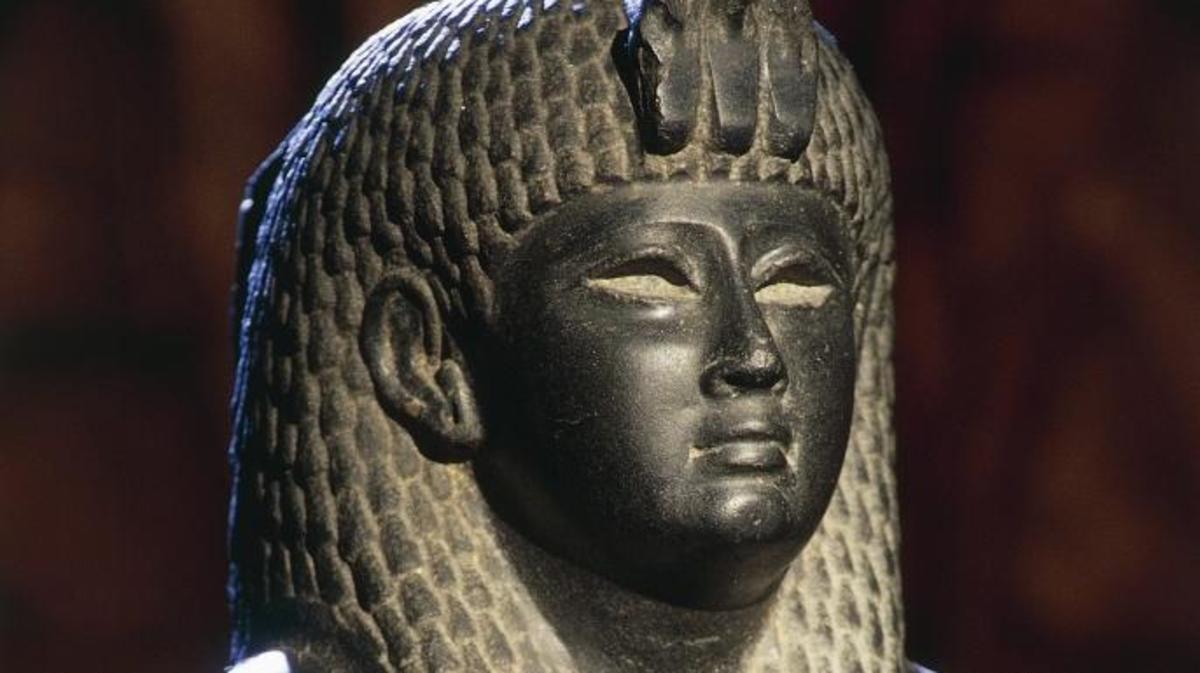 Roman propaganda painted Cleopatra as a debauched temptress who used her sex appeal as a political weapon, but she may have been more renowned for her intellect than her appearance. She spoke as many as a dozen languages and was educated in mathematics, philosophy, oratory and astronomy, and Egyptian sources later described her as a ruler “who elevated the ranks of scholars and enjoyed their company.” There’s also evidence that Cleopatra wasn’t as physically striking as once believed. Coins with her portrait show her with manly features and a large, hooked nose, though some historians contend that she intentionally portrayed herself as masculine as a display of strength. For his part, the ancient writer Plutarch claimed that Cleopatra’s beauty was “not altogether incomparable,” and that it was instead her mellifluous speaking voice and “irresistible charm” that made her so desirable.

4. She had a hand in the deaths of three of her siblings.

Power grabs and murder plots were as much a Ptolemaic tradition as family marriage, and Cleopatra and her brothers and sisters were no different. Her first sibling-husband, Ptolemy XIII, ran her out of Egypt after she tried to take sole possession of the throne, and the pair later faced off in a civil war. Cleopatra regained the upper hand by teaming with Julius Caesar, and Ptolemy drowned in the Nile River after being defeated in battle. Following the war, Cleopatra remarried to her younger brother Ptolemy XIV, but she is believed to have had him murdered in a bid to make her son her co-ruler. In 41 B.C., she also engineered the execution of her sister, Arsinoe, who she considered a rival to throne.

5. Cleopatra knew how to make an entrance.

Cleopatra believed herself to be a living goddess, and she often used clever stagecraft to woo potential allies and reinforce her divine status. A famous example of her flair for the dramatic came in 48 B.C., when Julius Caesar arrived in Alexandria during her feud with her brother Ptolemy XIII. Knowing Ptolemy’s forces would thwart her attempts to meet with the Roman general, Cleopatra had herself wrapped in a carpet—some sources say it was a linen sack—and smuggled into his personal quarters. Caesar was dazzled by the sight of the young queen in her royal garb, and the two soon became allies and lovers.

Cleopatra later employed a similar bit of theater in her 41 B.C. encounter with Mark Antony. When summoned to meet the Roman Triumvir in Tarsus, she is said to have arrived on a golden barge adorned with purple sails and rowed by oars made of silver. Cleopatra had been made up to look like the goddess Aphrodite, and she sat beneath a gilded canopy while attendants dressed as cupids fanned her and burned sweet-smelling incense. Antony—who considered himself the embodiment of the Greek god Dionysus—was instantly enchanted. 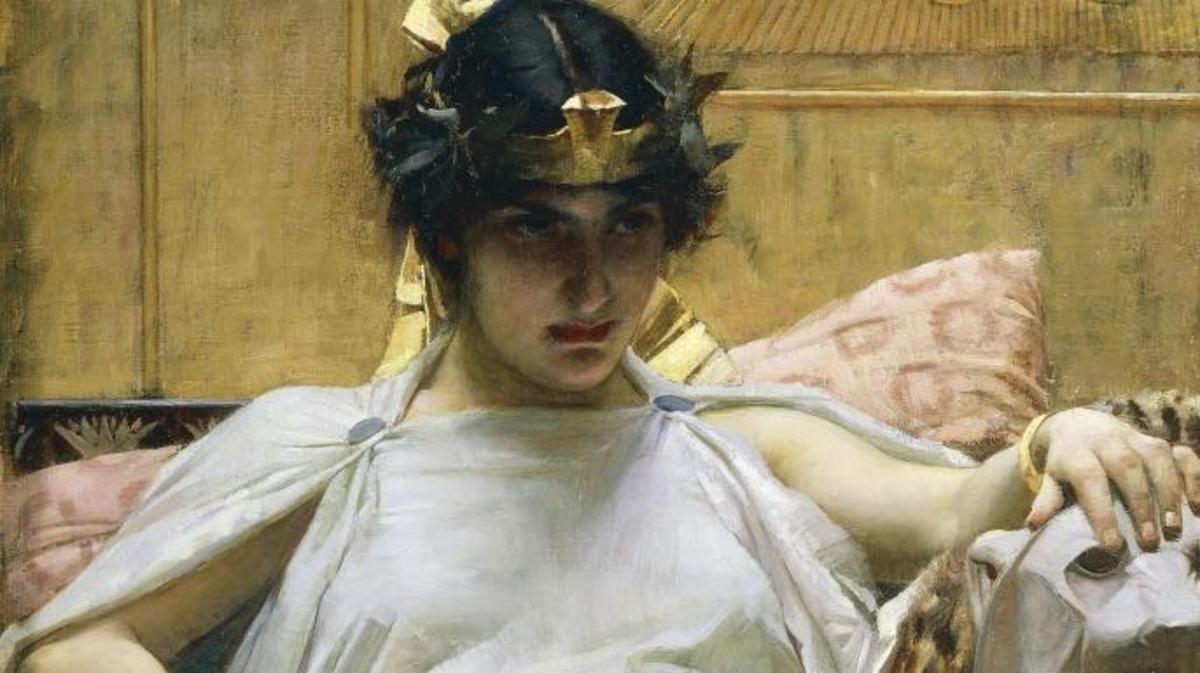 6. She was living in Rome at the time of Caesar’s assassination.

Cleopatra joined Julius Caesar in Rome beginning in 46 B.C., and her presence seems to have caused quite a stir. Caesar didn’t hide that she was his mistress—she even came to the city with their lovechild, Caesarion, in tow—and many Romans were scandalized when he erected a gilded statue of her in the temple of Venus Genetrix. Cleopatra was forced to flee Rome after Caesar was stabbed to death in the Roman senate in 44 B.C., but by then she had made her mark on the city. Her exotic hairstyle and pearl jewelry became a fashion trend, and according to the historian Joann Fletcher, “so many Roman women adopted the ‘Cleopatra look’ that their statuary has often been mistaken for Cleopatra herself.”

7. Cleopatra and Mark Antony formed their own drinking club.

Cleopatra first began her legendary love affair with the Roman general Mark Antony in 41 B.C. Their relationship had a political component—Cleopatra needed Antony to protect her crown and maintain Egypt’s independence, while Antony needed access to Egypt’s riches and resources—but they were also famously fond of each other’s company. According to ancient sources, they spent the winter of 41-40 B.C. living a life of leisure and excess in Egypt, and even formed their own drinking society known as the “Inimitable Livers.” The group engaged in nightly feasts and wine-binges, and its members occasionally took part in elaborate games and contests. One of Antony and Cleopatra’s favorite activities supposedly involved wandering the streets of Alexandria in disguise and playing pranks on its residents.

8. She led a fleet in a naval battle.

Cleopatra eventually married Mark Antony and had three children with him, but their relationship also spawned a massive scandal in Rome. Antony’s rival Octavian used propaganda to portray him as a traitor under the sway of a scheming seductress, and in 32 B.C., the Roman Senate declared war on Cleopatra. The conflict reached its climax the following year in a famous naval battle at Actium. Cleopatra personally led several dozen Egyptian warships into the fray alongside Antony’s fleet, but they were no match for Octavian’s navy. The battle soon devolved into a rout, and Cleopatra and Antony were forced to break through the Roman line and flee to Egypt. 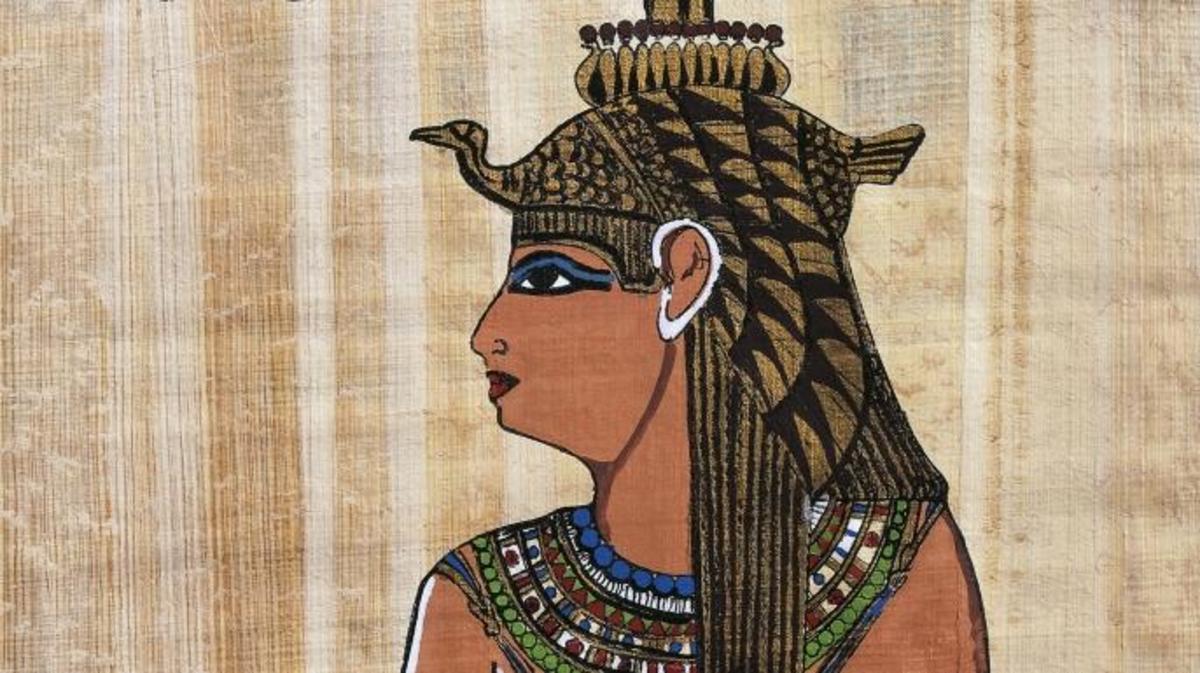 9. Cleopatra may not have died from an asp bite.

Cleopatra and Antony famously took their own lives in 30 B.C., after Octavian’s forces pursued them to Alexandria. While Antony is said to have fatally stabbed himself in the stomach, Cleopatra’s method of suicide is less certain. Legend has it that she died by enticing an “asp”—most likely a viper or Egyptian cobra—to bite her arm, but the ancient chronicler Plutarch admits that “what really took place is known to no one.” He says Cleopatra was also known to conceal a deadly poison in one of her hair combs, and the historian Strabo notes that she may have applied a fatal “ointment.” With this in mind, many scholars now suspect she used a pin dipped in some form of potent toxin—snake venom or otherwise.

The Queen of the Nile has been portrayed on the silver screen by the likes of Claudette Colbert and Sophia Loren, but she was most famously played by Elizabeth Taylor in the 1963 sword-and-sandal epic “Cleopatra.” The film was plagued by production problems and script issues, and its budget eventually soared from $2 million to $44 million—including some $200,000 just to cover the cost of Taylor’s costumes. It was the most expensive movie ever made at the time of its release, and nearly bankrupted its studio despite raking in a fortune at the box office. If inflation is taken into account, “Cleopatra” remains one of the priciest movies in history even today.