About Petra History, (The Ancient City):

The ancient city of Petra is one of Jordan's national treasures and by far its best-known tourist attraction. Located approximately three hours south of Amman, Petra is the legacy of the Nabataeans, an industrious Arab people who settled in southern Jordan more than 2,000 years ago. Admired then for its refined culture, massive architecture and ingenious complex of dams and water channels.

Petra is now a UNESCO World Heritage Site that enchants visitors from all corners of the globe. Much of Petra's appeal comes from its spectacular setting deep inside a narrow desert gorge. The site is accessed by walking through a kilometer long chasm (or siq), the walls of which soar 200m upwards. Petra's most famous monument, the Treasury, appears dramatically at the end of the Siq. Used in the final sequence of the film "Indiana Jones and the Last Crusade." The towering façade of the Treasury is only one of the myriad archaeological wonders to be explored at Petra. Various walks and climbs reveal literally hundreds of buildings, tombs, baths, funerary halls, temples, arched gateways, colonnaded streets and haunting rock drawings - as well as a 3,000 seat open-air theatre, a gigantic 1st-century Monastery, and a modern archeological museum, all of which can be explored at leisure. A modest shrine commemorating the death of Aaron, brother of Moses, was built in the 13th century by the Mamluk Sultan, high atop mount Aaron in the Sharah range. 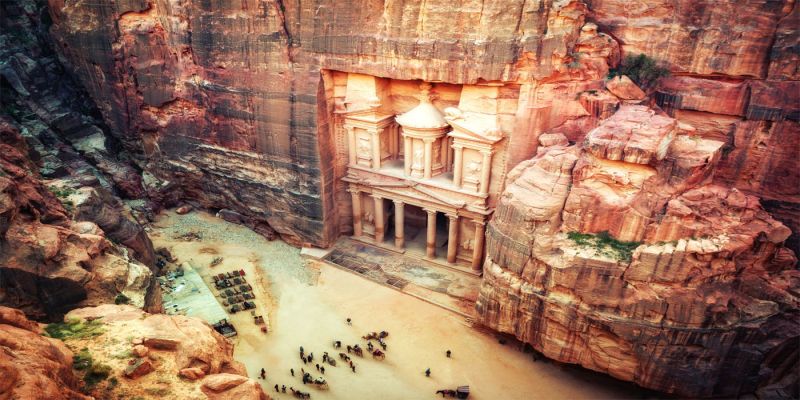 Petra is without a doubt Jordan's most valuable treasure and greatest tourist attraction. It is a vast, unique city, carved into the sheer rock face by the Nabataeans, an industrious Arab people who settled here more than 2000 years ago, turning it into an important junction for the silk, spice and other trade routes that linked China, India and southern Arabia with Egypt, Syria, Greece and Rome.

Entrance to the city is through the Siq, a narrow gorge, over 1km in length, which is flanked on either side by soaring, 80m high cliffs. Just walking through the Siq is an experience in itself. The colors and formations of the rocks are dazzling. As you reach the end of the Siq you will catch your first glimpse of Al-Khazneh (Treasury).

The long walk through this canyon is an exciting journey that is well worth a visit, not only for the historical treasures that lie beneath, but also for being one of the unique geological landscapes in the World. Carved out of pale reddish sandstone, the eastern side of this area is bounded by the King's Wall

This is an awe-inspiring experience. A massive façade, 30m wide and 43m high, carved out of the sheer, dusky pink rock-face and dwarfing everything around it. It was carved in the early 1st century as the tomb of an important Nabataean king and represents the engineering genius of these ancient people. 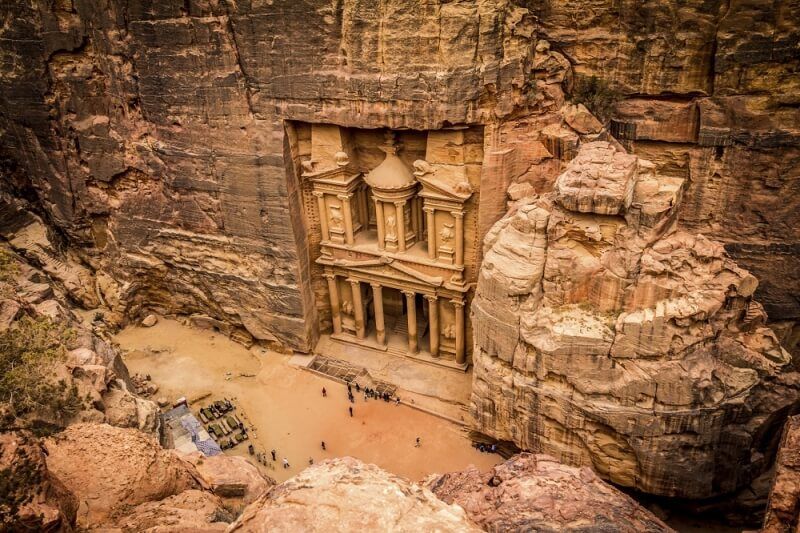 The Treasury is merely the first of the many wonders that make up Petra. You will need at least four or five days to really explore everything here. As you enter the Petra valley you will be overwhelmed by the natural beauty of this place and its outstanding architectural achievements. There are hundreds of elaborate rock-cut tombs with intricate carvings - unlike the houses, which were destroyed mostly by earthquakes, the tombs were carved to last throughout the afterlife and 500 have survived, empty but bewitching as you file past their dark openings. Here also is a massive Nabataean-built. The word "Khanzeh" treasure, was given by the local Bedouin tribes behind the belief that the urn on top of the front entrance contained the treasure of a pharaoh. The treasury's surface is sculptured in the first century AD and decorated with mythological figures and deities Nabataean. The facade of Petra is carved in a pink rock, ranging in color from white to pink, yellow and tawny. The facade leads to the grave serves as a tomb for the Nabataean king Aretas III and subsequently as a place of worship. 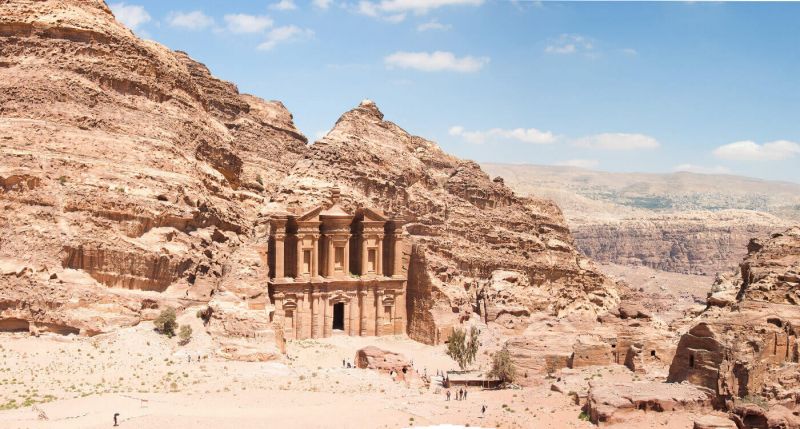 Roman-style theatre, which could seat 3,000 people. There are obelisks, temples, sacrificial altars and colonnaded streets, and high above, overlooking the valley, is the impressive Ad-Deir Monastery – a flight of 800 rock-cut steps takes you there. Within the site there are also two excellent museums; the Petra Archaeological Museum and the Petra Nabataean Museum both of which represent finds from excavations in the Petra region and an insight into Petra's colorful past.

A 13th-century shrine, built by the Mameluk Sultan, Al Nasir Mohammad, to commemorate the death of Aaron, the brother of Moses, can be seen on top of Mount Aaron in the Sharah range. 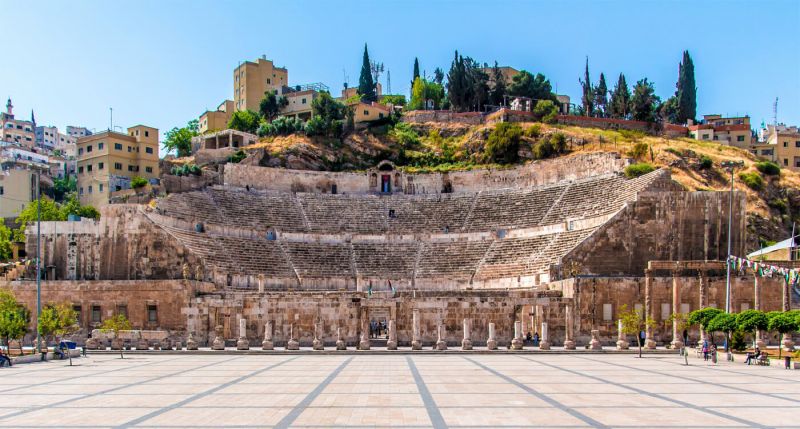 During any trip to Petra, you can't miss the unpredictable Royal Tombs that took its name from the rich decoration. To reach them you have to climb a stairway that leads to the famous Urn Tomb, which was used as a place of worship during the Byzantine Empire.

Beside the Urn Tomb is a small tomb known as the Silk Tomb. This name comes from the rich color of the sandstone. Then come next the Palace Tomb, the Corinthian Tomb and the Tomb Of Sesto Fiorentino 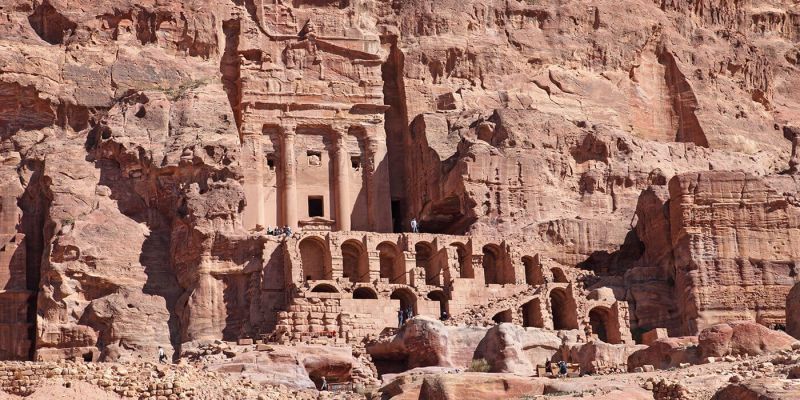 Jordan offers visitors a chance to learn about its rich history and culture, glimpse at some of the most spectacular sights in the world, and get in touch with magnificent natural wonders like the amazing ancient city of Petra Jordan.

Q- Who built Petra? A-Nabataeans-After that, the Nabataeans settled in the area around the 6th century BC. The Nabataeans were known for their organized trades in which over 500 years they used their wealth to built the famous Petra. The Nabataeans created their own script writing, they built dams and water channels to protect the city.


Q-What is Petra famous for? A-Famous for its rock-cut architecture and water conduit system, Petra is also called the 'Rose City' because of the colour of the stone from which it is carved. It has been a UNESCO World Heritage Site since 1985.


Q-Where is the lost city of Petra?A-Jordan-Located amid rugged desert canyons and mountains in what is now the southwestern corner of the Hashemite Kingdom of Jordan, Petra was once a thriving trading center and the capital of the Nabataean empire between 400 B.C. and A.D. 106. The city sat empty and in near ruin for centuries.


Q-Why is Petra called the Lost City?A- Petra is Smetimes Called the 'Lost City'- It was rediscovered in 1812 by the Swiss traveler, Johann Ludwig Burckhardt, who tricked his way into the fiercely guarded site by pretending to be an Arab from India wishing to make a sacrifice at the tomb of the Prophet Aaron.


Q-How was Petra destroyed?A-Petra was once a bustling city in the southern desert of Jordan near the town of Wadi Musa. ... In 363, an earthquake destroyed part of the town as well as the Nabataean aqueducts that had supplied water to the city. The last residents abandoned the city when the Arab conquered it about 663.


Q-Can you go inside Petra? A-Petra is also called the Rose city thanks to the pink color of the stone of the cliffs. I have heard that before you could actually go inside the Treasury, but as there are way too many tourists now and they degrade the inside of the place, you are only allowed to look from the outside .