- The history of Jordan

- The Royal Family of Jordan

- Tourism in Jordan: over 100,000 archaeological sites

Where is Jordan Located?

The history of Jordan - Short Message

Jordan is a land steeped in history. It has been home to some of mankind's earliest settlements and villages, and relics of many of the worlds great civilizations can still be seen today.

As the crossroads of the Middle East, the lands of Jordan and Palestine have served as a strategic nexus connecting Asia, Africa, and Europe. Thus, since the dawn of civilization, Jordan's geography has given it an important role to play as a conduit for trade and communications, connecting east and west, north and south. Jordan continues to play this role today. Take a look at some of Jordan's historical treasures by clicking here or learn more about the history of Jordan's major attractions by selecting a destination from the list below:

The Royal Family of Jordan

His Majesty King Abdullah II bin Al Hussein assumed his constitutional powers as King of the Hashemite Kingdom of Jordan on February 7th, 1999, the day his father, the late King Hussein, passed away.

His Majesty King Hussein bin Talal, the father of modern Jordan, will always be remembered as a leader who guided his country through strife and turmoil to become an oasis of peace, stability, and moderation in the Middle East. Among Jordanians, his memory is cherished as the inspiration for Jordan's climate of openness, tolerance, and compassion. Known to his people as Al-Malik Al-Insan ("The Human King"), King Hussein was the forty-second generation direct descendant of the Prophet Muhammad (PBUH)

The Hashemite Kingdom of Jordan is a constitutional. The monarch is the head of state, the chief executive, and the commander-in-chief of the armed forces. The king exercises his executive authority through the Council of Ministers. The cabinet, meanwhile, is responsible before the elected House of Deputies, which, along with the Senate, constitutes the legislative branch of the government. The judicial branch is a totally independent branch.

The “upper-middle income” country of Jordan, as classified from the National Bank, boasts a GDP of $40 billion per year with growth rate of 2.6% per annum. However, Jordan Kingdom has a well-diversified economy from trade, finance, communications, transportation, mining, constructions, public utilities, and tourism. Jordan’s official currency is the Jordanian Dinar, which has almost fixed exchange rate towards other foreign currencies like US Dollar or Euro (1 Dinar = 1.43 USD).

Due to Jordan’s well-built infrastructure and value of its cultural heritage, tourism has become one of the most important elements and sources of the national income. The reason is that Tourism represents an important source of hard currency, which helps Jordan to enhance and grow the trade sector as well as to increase national production. It’s working effectively on usage of facilities and services, which leads directly into rate increasing of employment. Beside that it is also helps in use of tourist facilities that are managed, operated and developed by the private and governmental associations. 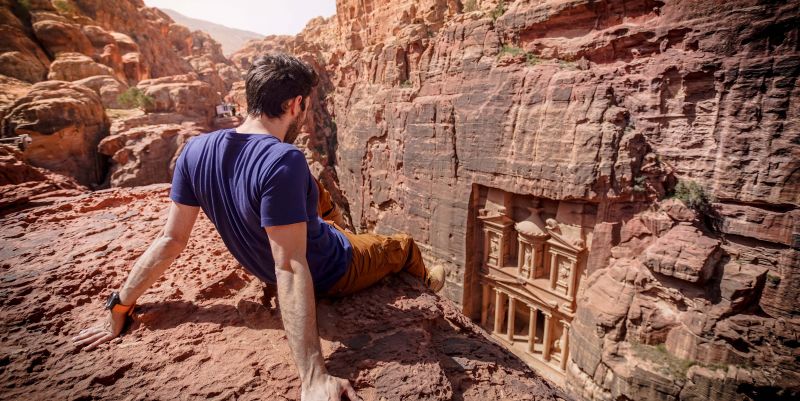 Jordan represents some important Eastern old cultures. That appears in some of the existing monuments such as the city of Petra, which is a huge tourist attraction for tourists from different countries.

According to the Jordanian Ministry of Tourism report, Jordan has more than 100,000 archaeological sites; some of them are still in its original state, such as the city of Petra and Jerash. Jordan is also part of the Holy Land and therefore attracts a number of visitors to do some activities of the pilgrimage. The holy sites of Jordan mentioned in the Bible are: Mount Nebo, Madaba, Al-Maghtas, location for the Baptism of Jesus and Umm ar-Rasas. Modern attractions include Amman, Aqaba and the Dead Sea, which is also a place for recreation, rest and holiday

You might need to know more about what to visit and see in Jordan & Egypt. To do visit this link: Egypt Tours