HOT AIR BALLOON RIDE LUXOR, OVER THE VALLEY OF THE KINGS IN EGYPT

For anyone who is visiting Egypt, a Luxor hot air balloon ride over the Valley of the Kings is a must. You have not seen the land of the ancient Pharaohs until you have looked down on it from the heavens, or as close as we can get to that in a hot air balloon.

Seeing the Valley of the Kings from above should be on everyone’s bucket list as there is no wonder why Luxor, Egypt is a top location to take a hot air balloon ride. Just an hour-long flight can have you soaring over some of the most famous ancient structures in the world. 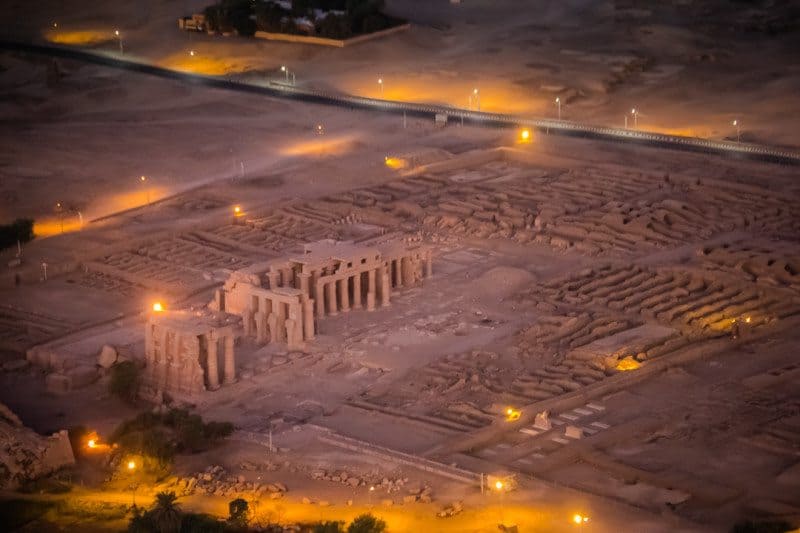 Our day started early at 3:30 am when our group of four got picked up at our hotel. None of us really knew what to expect as we stumbled out of the van and down to the Nile River to join a quick ferry ride over to the West Bank of the river. When we entered the ferry boat we found ourselves among many other tourists. I’m never nuts about things like this when there are tons of people pushing to get that one special photograph.

On the ferry, we were given tea and coffee along with our boxed breakfast. The breakfast was basic, one hard-boiled egg, one piece of bread, a packet of cookies and a juice box. This was our chance to eat it otherwise we had to carry it with us. After the quick ferry ride we loaded back into another van where we drove for another ten minutes.

During the drive, we got our first glance at some of the ancient structures that were lit up in the dark. Most were not lit up but the large statues of Les Colosses de Memnon were lit. This excited me as we pulled up to where the balloons were waiting to be inflated. Book your own Luxor Hot Air Balloon trip! 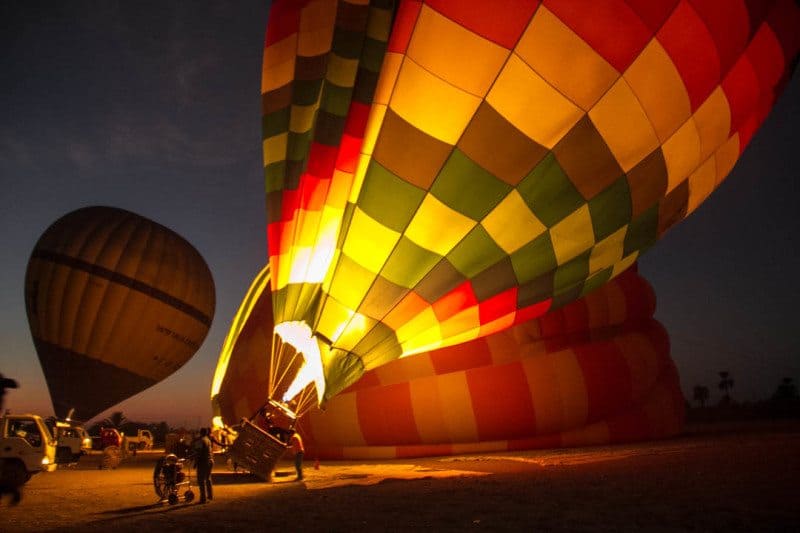 We arrived at the loud noise of the burners blasting hot air into the half-inflated balloons. The noise screamed across the ground each time the ground crew pulled the cord to add more air to each balloon. The noise was like a jet engine going on and off every few seconds.

We stepped out of our van in amazement to the loud and bright glow coming to just a few feet from us. The ground crew quickly grabbed us and headed us to a balloon that was just about to lift off the ground.

Each basket had around 16 people in it. The basket had four sections that held four passengers per section. The center of the basket had a confined area where the pilot would stand to control the burner.

Surprisingly, there was plenty of room to take photographs and feel comfortable during the hour flight. There are no changing spots around while the balloon is in the air so be sure to pick your spot wisely. From where we were standing we could feel the heat of the burners each time the pilot pulled on his cord. 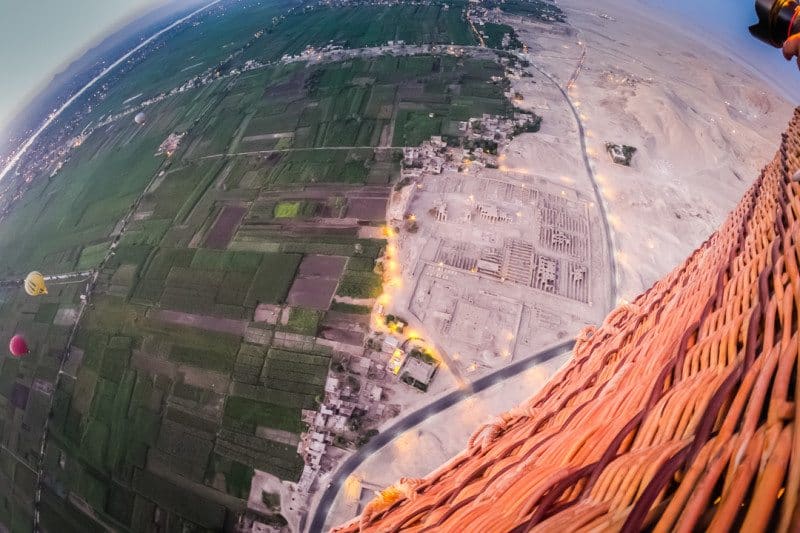 Into the Air over the West Bank

The ground crew started to wave goodbye as we slowly began to rise. The process was surprisingly slow and felt like nothing else I have experienced before. We floated up slowly and maintained a short distance between the bottom of the basket and the ground.  The sun was just starting to peek above the horizon as we rose above the ground.

The balloon’s air path went north to south ending near the valley of the workers and the tomb of Ramses III. The river will be on the east side where the sun will rise and most of the landmarks will be on the west side. 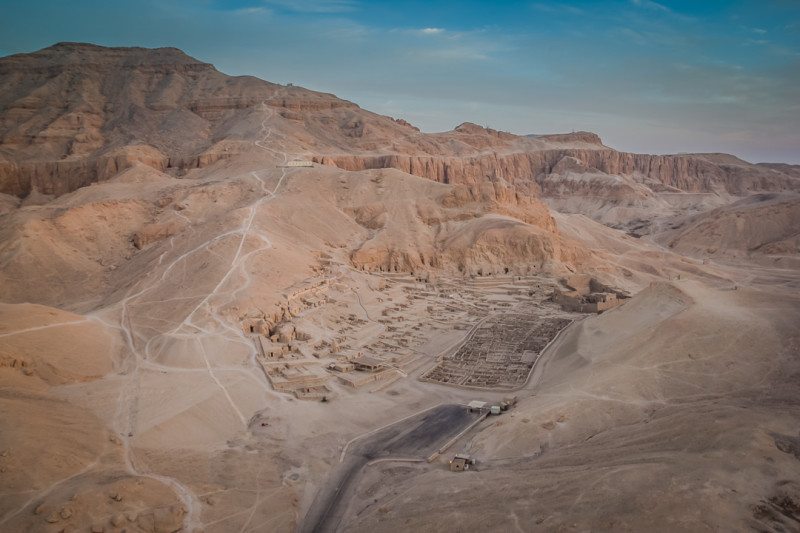 Birds Eye View of the Valley of the Kings

As we made our way over the ancient landscape of the Pharaohs, we soared over the Valley of the Kings. Having a bird eyes view really put into perspective how large of a site it is. This excited me more because after our balloon flight we were going to spend the whole day exploring the different sights.

The Valley of the Kings is hidden and built into the mountain landscape. This protected each tomb from looters. The flight became even more magical as the sun rose and gave off a golden look upon the ancient ruins.

Next to the Valley of the Kings was a great articular structure built into the side of the Mountain. As we looked down on the Mortuary Temple of Queen Hatshepsut beneath the cliffs of Deir el Bahari, we could see the three-story structure that had a large ramp leading to the top level of the temple. 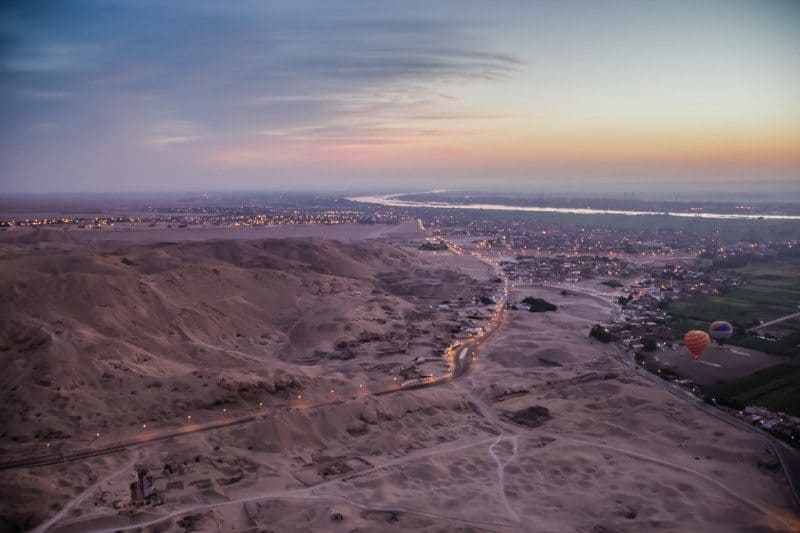 This temple is dedicated to the sun god Amon-Ra and is one of the first temples that the sun hits as it rises. Next to this temple are large ruins of Amenhotep II’s temple that today looks more like a quarry. These temples are considered some of the most incomparable monuments of ancient Egypt.

We floated over an area where hundreds of houses once stood. The ruins of them still littered across the land. We got a subtle glimpse of the ancient village of the workers, one of the most overlooked sites on the West Bank, and were so impressed that we had to add it to our sights to visit that afternoon.

Some balloons did not make it over all of the ancient landmarks a few even looked like they just took a Nile river cruise. I know you can’t control but our pilot controlled our balloon perfectly for us to be placed right over every landmark. This made for some great photographs and magical experience.

Our basket slowly touched down in a sandy rock field next to the Ramses III Tomb. The ground crew was there waiting for us to assist in our exit of the basket. With our feet back on the ground there was a five-minute song and dance from locals looking to make a few bucks off the tourists. While they did their thing, we did ours taking photos of the now half-filled balloons but that did not stop them from panhandling us and asking us for money.

We simply told them no and that was it. There were also kids asking for money and food from all of the passengers. Some of our passengers gave them some of their boxed breakfast. Once back in the van we were handed our personal flight certificate that highlighted a journey most people will only dream of. 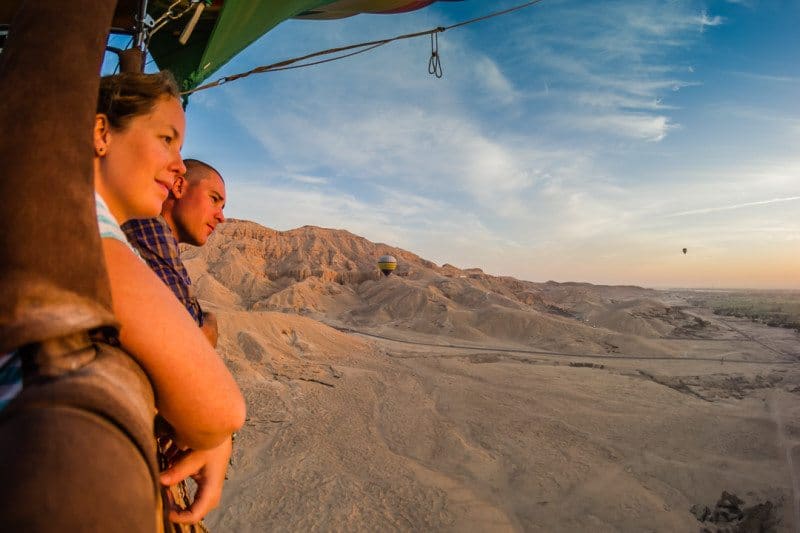 Is a Luxor Hot Air Balloon Ride in Egypt Safe?

Our pilot was experienced and pointed out all of the major sights to everyone. He had over 4,000 hours of flight time with hot air balloons. Weather is always a factor for flying; we had an excellent day with no winds. Flights do get canceled often due to strong winds. The flight is 100% one hour no more and no less.

Our pilot also travels for the Hot Air Balloon Company to find and test out new & used balloons to bring back to Egypt. The Balloon we flew in was used from the UK but in great shape. They have regulations and tests that are performed regularly. Book your own Luxor Hot Air Balloon trip!

While there have been some reports of bad experiences online, we had a great experience and felt safe for the duration of our flight. 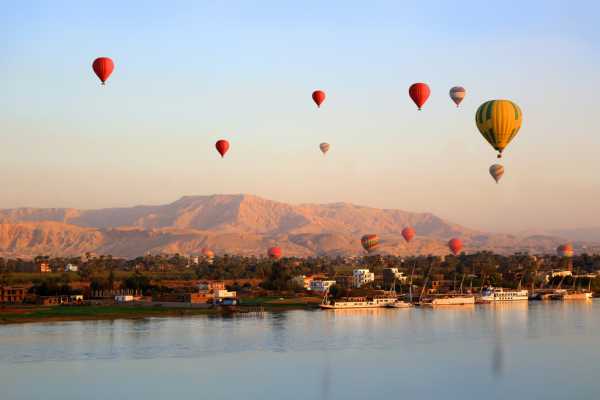 Luxor air balloon ride is an amazing way to see world’s largest open air museum. Early pickup from your hotel will take you to the ballon over Luxor in the morning, a light breakfast and te...
From USD 100
Book Now!