Valley of the Queens

Valley of the Queens

Valley of the Queens, also called Valley of the Tombs of the Queens, Arabic Wādī al-Bībān al-Harīm, or Wādī al-Harīm, gorge in the hills along the western bank of the Nile River in Upper Egypt. It was part of ancient Thebes and served as the burial site of the queens and some royal children of the 19th and 20th dynasties (1292–1075 BC). The queens’ necropolis is located about 1.5 miles (2.4 km) west of the mortuary temple of Ramses III (1187–56 BC) at Madīnat Habu. There are more than 90 known tombs, usually consisting of an entrance passage, a few short halls, and a sarcophagus chamber. The earliest may be that of Sitre, wife of Ramses I. The most notable are those of Nefertari, the favourite queen of Ramses II; of Princes Khaemwese and Amonhirkhopsef; and of a Ramesside queen called Titi. In 1979 UNESCO added the Valley of the Queens, the Valley of the Kings, Karnak, Luxor, and other sites of Thebes to the World Heritage List. 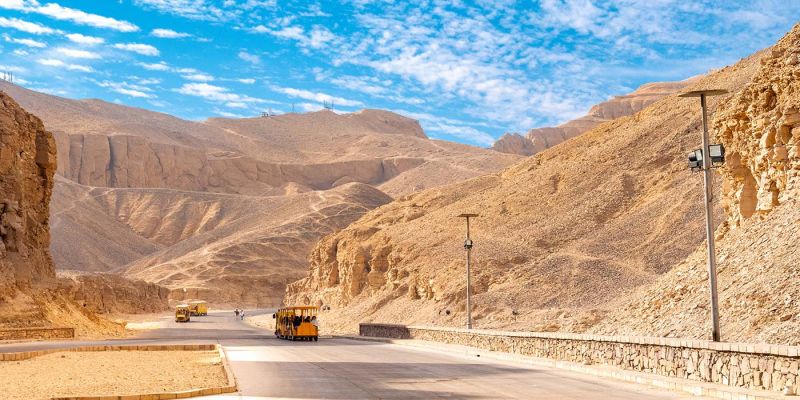 This son of king Ramses III died too young to pass into the divine presence of the gods and the underworld unaccompanied. The scenes show Ramses III leading the nine year old youth and introducing him to the various deities. The boy wears a side-lock of hair, indicating youth, and carries his feather of truth, as he follows his father

On the left-hand wall of the tomb chamber, traveling clockwise, we see Ramses III, followed by his young prince, offering incense to Ptah and then introducing his son to him. Ramses then presents the boy to Duamutedf and to Imseti. Who conducted the pair to Isis.

Note that Isis looks over her shoulder to the advancing pharaoh she holds him by the hand.

On the right hand wall Ramses and his son are conducted to Hathor, Hapi, Shu and Nephthys who puts h er hands beneath the chin of Ramses.

There was no mummy of the boy in the sarcophagus but instead the fetus of a six-month-old child. It is suggested that the queen was upset by the deathnof her son, that she miscarried the baby.

Visiting The Valley Of The Queens

Tourists that are intending visiting the site should keep in mind that only a limited number of tombs are open to visitors. The beautiful tomb of Queen Nefetari is open today. The tomb belonging to the wife of King Ramesses II is strictly off limits altogether. This is considered to be the most beautiful tomb discovered, but because of its fragile condition, officials feel that heavy tourist traffic could cause irreparable damage.

Getting to the site is relatively easy, but it can be a little bit costly if you are staying in Luxor and you’re travelling independently. At best, you could take a taxi to your nearest ferry terminal; then a ferry across to the West Bank and then a taxi to the site. Alternatively, you can take a taxi all the way, or hire a minibus which can be arranged at most hotels.

If you have booked a Luxor tour package through us, or any one of our Nile cruise holidays that include spending time in Luxor, your tour will most likely already include a visit to the Valley of the Queens, in which case you’ll have a personal guide and driver to take you to the site.