Dendera one of the best sights in Luxor, originally called Tentyris, was one of the most important religious centers in ancient Egypt. It is situated on the west bank of the Nile, south of Qena in Egypt. The city was rendered sacred by three sanctuaries: the Sanctuary of Horus, the god of the sky and protector of the pharaohs, the Sanctuary of Ihy, the young sistrum-playing son of Horus, and the Sanctuary of Hathor. Only the latter has survived practically inact, while no more than a few traces remain of the other two. 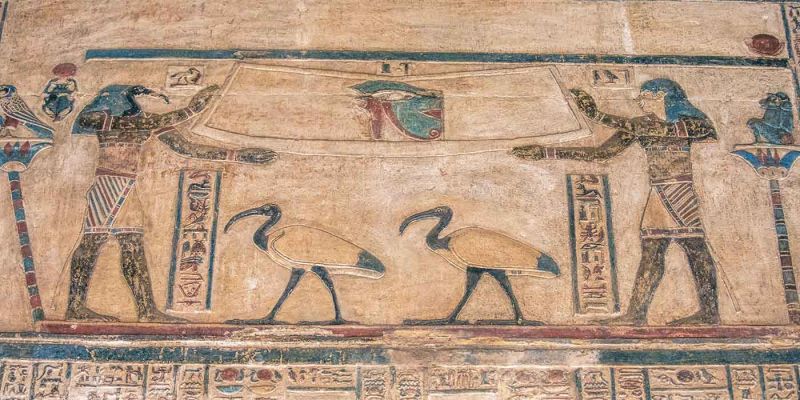 Since the most ancient times, Dendera must have had a sanctuary, which was destroyed and rebuilt several times; however, the present complex dates from the late Ptolemaic and Roman periods. This explains the prevalence of a magnificently scenic style, less severe than that of the oldest Egyptian temples, clearly evident in this lithograph, which shows the interior of the first hypostyle room, a magnificent chamber over 80 feet deep, featuring 18 huge columns covered with bas-reliefs.

The temples of Dendera does not feature the pylon usually present in sacred Egyptian architecture; the front of the building is formed by a massive structure measuring 139 feet wide by 60 feet high, with six columns on the façade on which an impressive cornice rests. The intercolumniations are occupied as far as the halfway up by panels covered with hieroglyphic texts and bas-reliefs, while the entrance opens in the center, forming a high, empty space wider than the adjacent ones.

Inside, 18 more columns stand in three rows; all the capitals reproduced the features of the patron goddess of the place. As it is higher than the rest of the temple, this hypostyle room, added under Tiberius, to some extent acts as the missing Pylon.

The temple of Dendera, built by Ptolemy IX SoterII, stands in the middle of a huge area bounded by a wall of air-dried bricks, almost entirely ruined, whose sides are between 925 and 990 feet long; on the north and east sides are two magnificent portals built during the period of Roman rule. Apart from the great sanctuary, some outstanding monuments stand in the sacred enclosure. Not far from the rear façade of the great temple are the badly damaged remains of a small sanctuary dedicated to the birth of Isis; the surviving reliefs portray Nut, goddess of the sky, giving birth while sitting on a stool in accordance with the ancient local custom.

Nearby, to the west, is a deep rectangular hollow enclosed by a boundary wall; this is all that remains of the sacred lake typical of all Egyptian sanctuaries, where the priests had to perform their ritual ablutions several times a day. The most interesting remains, including a well, a sanatorium dating from the Roman period, a Coptic church and two mammisi, one Ptolemaic and the other Roman, are scattered along the western wall and in the northwest corner of the Temple of Hathor.

Mammisi, whose name means birth chapel, are small temples typical of the Early Period in which the pharaohs’ children were honored on the pretext of worshipping the birth of the gods. Their children, considered to be on a par with living deities, could only be born within the sacred precincts of the temple. The first building of this king was erected at Dendera by Nectanebo I between 378 and 360 BC, while the adjacent one was built by the order of Augustus.