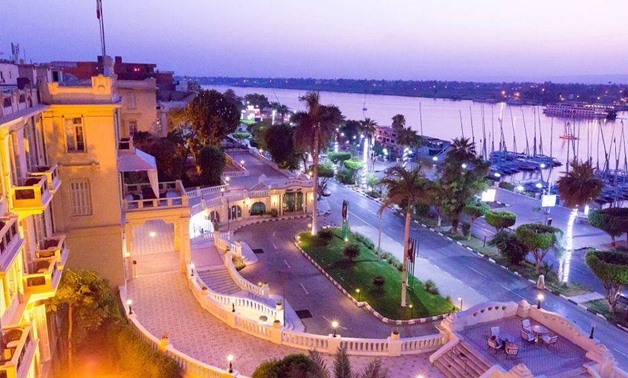 The ancient city stood on both sides of the Nile, and few spots in Egypt are so ideally suited to such a purpose. The rang of hills to the east and west curve away from the river’s bank leaving broad plains on either side. Here marvelous monuments were raised in honour of Amon-Ra.

Luxor, which developed into the great capital of the Egyptian empire, had no particular importance during the first thousand years of Egypt’s ancient history. When Narmer moved northwards to unite the Two Lands and establish Memphis as capital; in the Early Dynastic Period when the kings constructed their cenotaphs at Abydos; during the Great Pyramid Age when granite was quarried from Aswan in the south and transported to the necropolis of Giza to the north-throughout all these long centuries Luxor was no different from the chief cities of other provinces.

It was only after the collapse of the Old Kingdom, when the country had passed through the period of disorder known as the First Intermediate Period that a noble family from Armant, a village south of Luxor, began to assert themselves. They had already shown their powers of leadership by distributing grain between various provinces in times of low flood, and towards the end of the 10th Dynasty (2133 BC), they annexed Luxor and moved north-wards. Their aim was to reunite the Two Lands and take over leadership.

At this time another powerful family from the Fayoum area ruled from Memphis to Assiut, and aware of the aspiration of the Theban family, they moved their forces to meet them. The result was a long and bitter struggle. However, the Thebans emerged victorious, reunited the Two Lands, and launched Egypt on its second great period: the Middle Kingdom.

For some two centuries (1991-1786 BC) Egypt enjoyed a period of peace and prosperity. Luxor, however, was capital for only a short time before the Pharaohs chose a site more suitable for a central government: El Lisht, some thirty kilometers south of Memphis. Political stability led to an art and architectural revival, important irrigation projects, and extensive commerce with neighboring lands. Egyptian influence spread to Libya, Crete, Palestine, Syria, and southwards to Nubia where great fortresses were built .The most significant event in Luxor, however,was the introduction of the god Amon-Ra and building of modest shrines in his honour.

It was only after the Hyksos occupation and expulsion that Luxor and its local god achieved prestige, and then on a scale never imagined. For, after the Thebans (Kamose followed by his brother Ahmose, father of the New Kingdom) won the war of liberation, they not only drove the hated occupiers out of Egypt but swore to avenge their country for its suffering. They followed the enemy into Asia, and the age of conquest began.

The New Kingdom (1567-1080 BC) was the empire period. Thutmose I extended Egypt’s southern border towards Kush, and Thutmose III established Egyptian supremacy in Asia Minor and all the neighboring countries. As trade flourished, Luxor became paramount among the cities of Egypt. Caravans from the conquered territories, laden with gold and silver, precious metals, ivory, timber, spices, rare flora and fauna, made their way to Upper Egypt.

The Priests of Amon-Ra, into whose hands a vast portion of the wealth was pouring acquired increasing influence, and the Pharaohs ordered the construction of marvelous monuments in honour of their gods. They declared that Amon-Ra was not only ‘God of karnak’ and ‘God of Thebes’ but was, in fact, the ‘King of Gods’, and that their priesthood was second to none.